Creating from Nothing – Campaign Gives Voice to ‘Say Hi, Vancouver’ 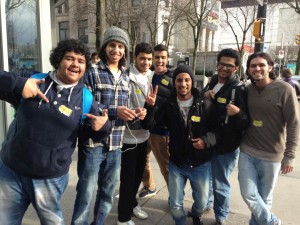 A viral campaign connects strangers by encouraging them to say hello to each other. When Shelley Koorbatoff, a participant in Landmark’s Self-Expression and Leadership Program in Vancouver, took possession of a chair in the program’s first classroom, she acted as others were doing; she began to chat with her neighbor.

As frequently happens at Landmark events, people were sharing what they were up to, what they expected, and what they hoped to get out of the program. The name tags adorning everyone’s chest were kind of an ‘Open, Sesame’ to conversation, making it natural to address someone by name.

For Shelley, the relatedness, the ease of communication, the atmosphere of people up to something was welcome and stimulating. ‘Why can’t we have this kind of openness with strangers every day?’ she wondered. The thought was just a passing notion, but somehow, it stuck.

Perhaps the idea gained momentum out of her own ‘newbie’ status in Vancouver. Since arriving there, she had felt disconnected with the city, its people, and even her neighbors. Originally from a much smaller city, Koorbatoff was used to knowing people, sharing greetings, and feeling like a part of the broader community. The possibility of something flickered into being as she extended that unspoken discussion. “What difference would that make in daily life?” came another question during her classroom.

“I had been to conferences,” Shelley recalled, “so many in fact, that ‘Hello, my name is…’ had become sort of a joke. In all those conferences, though, the benefits of that kind of instant, neighborly connection had never occurred to me before.”

As the classroom went on, Shelley revealed the burgeoning idea of ‘Say Hi, Vancouver’ with several people. “Great idea!” “You should totally do that!” “Yes, cities are so impersonal. Do it” The feedback was unanimously positive.

However, her own feelings began wavering. Doubts crowded in. “People will think I am pathetic, just an attention getter.” The litany of concerns grew until they crowded out the inspiration. “I don’t know anything about social media.” “I have no idea how to put this together.” “What am I thinking? I can’t pull this off?” A familiar internal debate took shape.

Finally, just three weeks from the end of the program, Shelley gave in, took a leap, and committed. “I called six people together for a brainstorming session at noon on a Friday. I told them the plan for ‘Say Hi, Vancouver’, and revealed my goal. I wanted to have 600,000 people saying “Hi” for one day.”

Then, she disclosed the looming deadline. “I want to do this in three weeks,” she told the team, hoping they wouldn’t abandon her.

From that shotgun wedding start, the project had wings. The team of six, all from Shelley’s workplace, Sierra Systems, became an action machine; soon, people were donating time, setting up Twitter accounts, creating a Facebook page, and designing the “Say Hi” tags. Less than 72 hours later, at 7:30am on Monday, the first piece of information was posted on Facebook. A snowball careening down a mountain slope had nothing on Shelley’s project from that that momentous Monday on. In addition to the social media, radio and television vied for information on the purpose of ‘Say Hi, Vancouver.’

“Saying ‘Hi’ is a way to break through barriers, to connect with others in a way that is positive and friendly,” Shelley told various reporters. It was a mantra she repeated over and over as the event barreled into existence.

People she didn’t know began to align themselves around ‘Say Hi’, perhaps partly because it coincided with the first ever Family Day Celebrations in Vancouver.

“I was so inspired by people,” Shelley said, “by how this idea resonated with them. It wasn’t just me. I am a very social person, but I had lived in Vancouver for two years and I had not managed to meet many people at all. So many other people felt the same.”

The first week after the Facebook release was a media blitz and the campaign trended throughout the city and country, everywhere. The second week, a lull fell over the campaign and the team feared the project had peaked too soon. It hadn’t. The third week articles appeared in the Huffington Post, plus more radio and television requests, and even a supportive flash mob event took place. The actual date for the first “Say Hi, Vancouver” day was February 8, 2013. Shelley, members of the team, and volunteers who appeared out of nowhere took to the streets. For hours they accosted stranger after stranger with the ‘Say Hi’ tags and explained the need and goal of the project. In Robson Square, six strangers joined Shelley and ended up asking to hand out name tags. “Let’s go for a walk,” Shelley suggested, and they did, around and around the inner core of the city.

What had originated as a one woman hope spread in the smiles and friendliness of thousands and thousands of others. When she talked to the team afterwards, they all were stunned. “Wow! Can you believe the last three weeks actually happened?”

“It wouldn’t have happened if I hadn’t kept the conversation going,” she says, looking back.  “That negative conversation will always happen, I think. But, it doesn’t need to win.”

After its success in 2013, “Say Hi” Vancouver came back for a revival in 2014, and, passed on to the efforts of others, it looks set to continue on into the future.