Volunteers for “I Love My City” Contribute Instead of Complaining 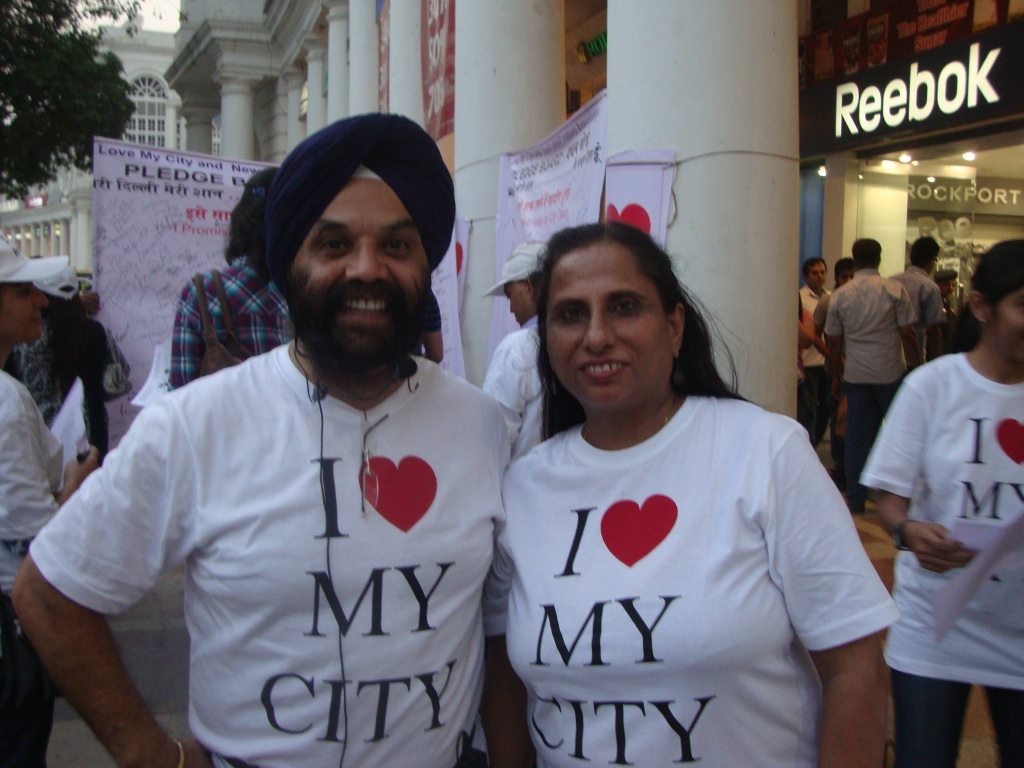 'I Love My City' has improved the lives of Indian citizens through a variety of innovative initiatives. Often people ask about the long term effects of Landmark programs. In the city of Faridabad, India, lives one man who could answer that question first-hand, and he would probably say it was a slow, warm, burn to action. Fifteen years ago, P.P. Singh (Prithpal) took The Landmark Forum in Delhi, India with 1,000 other attendees. The learning he gained, combined with subsequent courses, enabled him to accomplish more than he could have imagined.

But, it didn’t happen right away. A successful IT manager for a British multi-national corporation, P.P. settled first in India’s capital after emigrating from Burma and later moved to Faridabad, about 45 minutes southeast of the larger city.  Faridabad became home in every sense: a place where he grew professionally, where he married and raised a family, and where he put down emotional roots.

In 2010, a moment came when something stirred for Mr. Singh. He wanted to give back to the city where he had found happiness. He explained that, at first, he couldn’t think of any project that would truly make a change. During his time in the Self-Expression and Leadership Program, Singh had developed a project that had not reached completion. Thus, there was a tinge of that failure still lurking in his mind as he recognized this desire to be a positive force in the community. In the end, one possibility bumped into his consciousness–a particularly large, deep, and dangerous pothole bounced him out of doubt and into action. Like many urban areas, Faridabad, a city of two million, cannot always keep up with the necessary repairs to its roadways. That was definitely the case in Sector 23 where one pothole had been the cause of several accidents, vehicle damage, and traffic delays. For two years, the expanse–12 feet wide, three feet long and a foot deep sitting right in the middle of a busy roadway–had been ruining axles, toppling bicyclists, and jumping auto rickshaws and motorcycles.

Singh went to the local Municipal authority and asked for the treacherous patch to be repaired. His request was heard but never acted on. Undaunted, Singh considered the next step. “Landmark gave me a reason to take responsibility and stand up for the cause,” he told me.

As a result, he formulated a slogan that has guided all subsequent projects: “We will not complain, we will contribute.” By talking to neighbors in the area, business owners, and even commuters, P.P. managed to enroll dozens in the idea of forming a group to take on the pothole and other needed operations around the city. The group came to be called “I Love My City”, proudly proclaiming itself a “Non Profit & Non Govt. Social Awareness Organization”. What is compelling about the way Singh and the others work is how they incorporate two or more ideas to extend the reach of their activities. Finding road engineers, planning the event, buying the cement and other supplies, and organizing the rerouting of traffic, would have been a commendable enough endeavor. Instead, “I Love My City” decided to use the project as an opportunity to reach out to commuters as well, to educate them on traffic safety in areas where children are often walking or are passengers in cars or on the backs of mopeds. As the group prepped for the repair, they also designed and printed traffic safety pamphlets to hand out along the road.

On the appointed day, dozens of volunteers gathered, a team consisting of men, women and children. Some redirected traffic and put out cones; others, guided by the experts hired to get the job done right, shoveled up broken bits of paving, leveled the surface, mixed cement, and gradually spread it across the hole. Meanwhile, another group handed out pamphlets and talked to drivers as they slowed to negotiate the detour.

One morning was all it took to make the repair, and it was done without any government or municipal assistance. “I Love My City” healed the road, connected with the community, and, in the process, almost instantly improved the lives of tens of thousands of Indians. Later, when P.P. talked to people who witnessed the street work, they said, “You did a wonderful job.”

Following the pothole project, P.P. discussed future options with the volunteers. They wanted to start with cleanliness. “Everyone criticizes India. Why is it so dirty? I made it dirty. We all made it dirty. It is up to us to fix that,” said Singh. Still, cleaning up India wasn’t the place to start. “I Love My City” wanted to start with the people. “The most important thing was that we create a sense of brotherhood, in this neighborhood, with that person, in this city,” they agreed. It takes a delicate touch to talk to people about what is not working in a community without making people wrong, but Singh believes that with a bit of assistance, like the physical and enthusiastic efforts coming from his group, the public at large will take a greater interest in their city and begin to work harder to improve it themselves.

It was faith in people’s ability to take responsibility that led to another project, this one in New Delhi. A vast and ancient city, Delhi gives evidence of all the timeless influences that have imprinted the culture and the people. One location, Connaught Place, formerly the administrative site of the British Raj, is now one of the foremost centers for business and finance in the country. An historic treasure, the pillars and details of this Georgian edifice are reminiscent of Bath during the era of the British Empire.

Yet, over time, a peculiarly Indian habit has besmirched and marred its glorious lines and surfaces. The habit is spitting, spewing the red mucosal residue of betal nut from ground to shoulder height on walls, pillars, statues, and doors. Betal nut is a popular psychoactive crop that is chewed by millions throughout Asia and Southeast Asia. In India, chewing betal is a nationwide problem, but eradication of the habit was not the goal of “I Love My City”. “I cannot change male culture,” admitted P.P. So, they focused on a visual assault, the ugly stains from betel nut spit that left dried blood-red splotches on every wall of Connaught Place. Restoring the beauty of Connaught Place could not be done without permission, so P.P. wrote a letter to the President of Market Association, outlining the problem, and offering a solution, free of any charge.  “I Love My City” would provide the paint, brushes, buckets, helpers, and even professional painters. All they needed was official permission. Upon receipt of the letter, the director called Singh and arranged a meeting.  “We will paint up to shoulder height or wherever the betal stains end, but we will not paint the entire structure,” he explained.  No problem.  The director and his associates agreed to the project, asking only that a specific paint brand be used.

Following a short fund-raising effort and the necessary planning, “I Love My City” travelled to Delhi. As they had done previously, this event was an opportunity to educate as well as to paint, so some of the volunteers visited shops and talked to shop owners about what was happening, and others spoke to customers as they exited the building. “Do you want to help beautify Connaught Place? Here’s a brush. Paint a little.” Soon, shop owners, customers, and even the administration of Connaught Place were daubing clean white paint all over, covering the unsightly splashes of betal red. The change was dramatic, and the thanks given “I Love My City” afterward prolific. Everyone connected to Connaught Places was determined to keep it looking clean, white, and welcoming.

One other example demonstrates the nuanced skills Singh has developed to work with all groups of people. The situation was this: bicycles number 800,000 in Faridabad, but streetlights on roadways are few. Normally, plastic reflectors on a bicycle’s wheels and fenders would announce the presence of a bicyclist ahead or to the side. Unfortunately, a well-used bicycle’s reflectors are often broken and not replaced. This makes the rider a nearly invisible shadow in nighttime traffic. “I Love My City” wanted to lower the injury and death rate of those who ride bicycles by promoting and distributing stick-on reflectors that wouldn’t break and that would give warning to truck and car drivers.

The best place to find bicyclists was at the factories where they worked, so the directors and managers were the people Singh approached. Yet, his appeal to these leaders was not simply about traffic safety in their neighborhoods, it was about economics. “You train a man to run a 20 million rupees machine, the key to your production and output, and then he is injured on a darkened roadway. What will you do? Your expensive machine will be silent.  We need to make sure these workers are safer as they ride to work.”

The directors and managers saw the benefit to themselves and became eager supporters of the reflector sticker program. Soon, the factories’ management had taken over the task from “I Love My City” and, to date, they have handed out over 100,000 of the life-saving stickers. The program is beginning to spread nationally.

P.P. Singh started out wanting to make a change and he has done so, engaging with every level of society in the process and bringing “I Love My City” to the notice of those far beyond his nation.  That early failure in the Self-Expression and Leadership Program has been exorcized, but P.P. remains a very modest gentleman. He wanted me to know how much credit had to go to his wife, Manbir, who herself is a graduate of Landmark’s curriculum, and who led from the front in many events, and the team of highly committed volunteers who are the pillars of “I Love My City” and who have made this journey possible.

He stressed, too, that his transformation is a work in progress. “I still have fears that things are not possible. I still fear that I am weak inside,” he confesses, “but I continue to try to accomplish something important for my city and my country.”