One person's project in Landmark's Self-Expression and Leadership Program is transforming the Mumbai transportation system so that deaf people can travel as easily as hearing people. 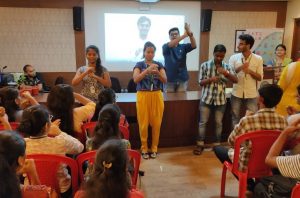 ‘Let’s talk’ is an initiative created in Landmark’s Self-Expression and Leadership Program about teaching a syllabus of Indian sign language to all the auto rickshaw drivers and bus conductors In Mumbai, so that a community which depends on interpreters for their travel in this bustling city is able to commute independently, and is empowered in their full self-expression. Additionally, the initiative aims to educate all hearing individuals in sign language. In short, it is a project for all citizens of the city. A team of 30 team leaders, comprising of rickshaw union leaders, office employees/ owners, speech therapists, students, architects and homemakers among others and are contributing their talent and efforts in every way possible.

The education is delivered to individuals through two-hour free seminars throughout the weekends and on select weekdays. The intent is to deliver impactful education through the help of deaf teachers themselves, representing the deaf community and allowing everyone to enter their world through this language.

The idea for the project struck Sahil Shah when he was awaiting a train on his way back home and saw two deaf individuals talking in front of him using sign language. The conversation was full of fun and joy and swift actions matched with excitement. As soon as the train came, they boarded the handicap compartment and headed off. What was left with Sahil and other hearing individuals was their disability which they never looked at.

The idea was revived when he took the Landmark Self-Expression and Leadership Program led by Aunshul Verma. Revisiting the memory of the station incident, Sahil thought back to the communication between the two, and then considered the communications they would have had to reach the station. 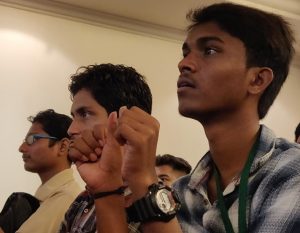 ‘How would they have communicated with the rickshaw driver or bus conductor to reach the station, or for that matter any destination they wish to go?’, he thought to himself. This question is where his project began. After interviewing various bus conductors and rickshaw drivers, he discovered the reality of the deaf community’s dependence on their interpreters (family and friends) for their daily travel and without the interpreters only a few bus conductors and rickshaw drivers would take them or leave them off to look for other means of transport. It became of utmost important for Sahil to wake up hearing individuals to the plight of hearing impaired people, and to provide a transport system which worked for the deaf community.

The first phase of the project involves educating the people in the public transport systems in Mumbai on Indian Sign Language, and then extending this to other sectors over the due course of time. The participants in the project are the rickshaw drivers and bus conductors for now. They plan to involve other sectors like offices, banks, the fire brigade, shops, schools, colleges and many more. 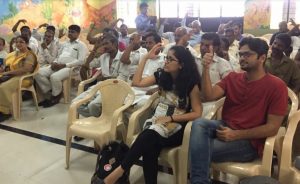 Many people and organizations have stepped forward to make a huge difference in the project. The BEST department has been willing to provide 10,000 bus conductors for this education, while rickshaw unions have volunteered their drivers. Other groups have provided communication, support, printing services, and a place to hold the seminars.

There were some challenges that came up at the start of the project, as the original main idea was to have a completely free seminar without money from the team leaders or collecting any money from the participants. The idea seemed practically impossible, but their vision of a free seminar was clear – When participants attend the seminars for free and step out into the world, they will be adding value to some deaf person’s life. The team was only asking people to invest their time in the seminars as the time they give will build a space to create an interest in a language they didn’t have access to.

There were many challenges, but by using the distinctions of The Landmark Forum, everything moved forward. They were able to enrol chools that allowed seminars for rickshaw drivers in their classrooms, and the BEST head office allowed seminars for bus conductors in the bus depots itself. A printer provided 2000 stickers for free, while a stationary shop lent stationary for the course without free of charge. All this allowed the seminars to be completely free, which will allow it to be run by any person in the future by just the help of the chain of team leaders. 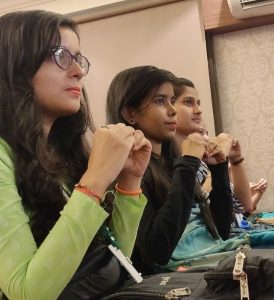 Sahil and his team has already conducted three seminars with rickshaw drivers, bus conductors and college students, along with teachers, and have imparted sign language education to more than 180 individuals in the course of three months. They have already lined up the next 4 seminars in the coming months, with an additional 300 people in the city scheduled to attend. They are also in talks with a few banks, the fire brigade, corporate and municipal offices, and community groups to provide this education to many more individuals operating in different sectors of the city.

The team intends to provide an able city having opportunities for independent travel for the deaf community. This will allow employment options for deaf people be based on talents and skills rather than letting the language disability be the deciding factor, and give them the choice to board a local compartment instead of a compartment for handicaps in the train.

Their vision for the future of the project includes creating a partnership with a deaf educational institution so the seminars are being taught by deaf teachers. This will enable the sessions to be represented by the community itself, and create proper understanding of the language as well.

The stickers which will be circulated to the rickshaw drivers, as well as the leaflets circulated regarding the seminars, will have a QR code link to the YouTube channel of the project to ensure easy access to the syllabus taught in the seminar.

They also intend to take this project to the education minister of Mumbai and have inclusion of sign language education in schools and colleges. Inclusion of special divisions for deaf students will create interactions with hearing individuals in recess, sports day, annual day, and all types of school events. The idea is to have schools across India have special divisions rather than only special schools.

-They intend to have the project communicate the need for subtitles in entertainment, so that movies and serials are made available for all citizens.The same will be communicated to the Information and Broadcasting ministry of India.

Finally, they intend to create a chain of team leaders, from printer shops to rickshaw unions and charitable trusts, to volunteer in the sessions and contribute time, energy and resources according to their capacities.

“It wouldn’t have been possible without Landmark to even start the project, as it would have remained as an idea only in the mind of a self-critical and self-doubting person afraid to speak out in front of superiors or officials,” says Shah.

“The subversive and fearful person that resided in me wouldn’t have even allowed speaking up the idea to my peers and relatives, let alone to strangers. But cut to the part of joining The landmark forum and how the insignificant parts of me vanished with every completion I did with the relations that mattered the most to me. And what emerged was an individual who wanted to make a difference and impact others with all his potential.”

“I started seeing every individual as the best possibility for the project, as well as in my life, and things looked different from how they earlier occurred. I started seeing people as there to listen to me if I want them to and what spoke out then was a confident person who enrolled others into theirs as well as others’ futures. There was no room for submissiveness. manipulation or convincing which are considered the tools to survive in this practical world, just being myself as I am and what I believe in. I started being alive every moment in this welcoming and accepting occurrence of the same world. Thanks a lot Landmark for changing my occurrence of the world and situations and circumstances, and gifting me the tools to live a life powerfully and a life I love.”