Life Blood For Those Who Need It 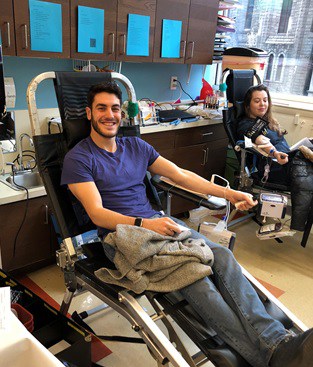 In the Self Expression and Leadership Program, Yoni Pessar chose a community-based project his first weekend, but quickly discarded it in favor of an idea that arose in his personal life. One day, he had an urge to donate blood:

“I initially I wanted to give blood…I hadn’t done that for many years, but I am conscious of the fact that I am a healthy, strong person. I knew I had a resource but was not ‘using’ it.”

In part, memories of a time when superb medical care saved the life of a family member drove this choice. That recalled sense of having someone he loved pulled back from the brink had stayed with him.

Ironically, the story of trying to give blood would make a great Seinfeld episode. Yoni road his bike to a hospital near Central Park. He parked and went in. In a bureaucratic shuffle, he was sent all over the hospital, from one department to another, only to find out that they don’t actually take blood donations. Beyond irritated, he took his generous offer to another hospital and got the same run around and then, the same story. Which is when he learned the value of blood drives. Many hospitals receive blood from outside collection organizations, like The New York Blood Center and the Red Cross. These groups do all the heavy lifting for the hospitals, organizing drives, finding donors, taking blood, packaging it, storing it, and delivering it.  Hospitals simply order blood for their patients.

All of which led Yoni to the notion that a blood drive would be a great contribution and a truly meaningful project. As an Eagle Scout, back in the day, Yoni had organized another event, but he recognized that, as a teenager, he hadn’t managed it as well as he could have. So, this time, Yoni was determined to find out as much as he could about process and logistics. Two people in his network had done similar projects, and he tapped them as resources. Both individuals came through with a lot of crucial information. 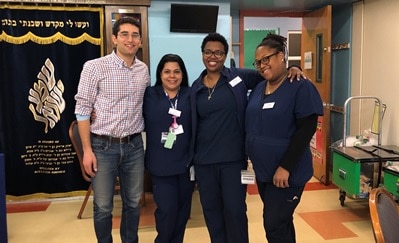 Yoni began by talking to rabbis at synagogues where he had occasionally attended services. Many of them were in the dark about how to pull off such an event. One rabbi, however, though not knowledgeable about blood drives per se, was open to the possibility. When Yoni asked, “Do you happen to know any synagogue in the area that might have space?”, the rabbi responded, “I think we can do that.”

Yoni Pessar and three of the four phlebotomists .With location handled, Yoni set about connecting with a blood center and learned to his pleasure that they had done this before. Everything in the medical, safety, equipment, and client realm would come from the center. Even then, a lot of issues needed to be managed. Yoni said that one of the benefits of the SELP project was that it provided a great excuse to talk to people. He was able to approach dozens of people to ask for assistance, sponsorship, information, or support with a clear, selfless message. What’s not to like about a blood drive?

“I was trying to target different groups,” he said, “social groups, religious groups, and other groups, like those on Facebook.” Notices were posted on social media, in grocery stores, in synogogues and meeting places. The blood bank center already had an online RSVP program but few people signed up, a result that was bothersome. Still, Yoni called the Self-Expression and Leadership Program a “low cost environment” in which to learn how to organize, manage, and deliver on programs and events. It was also a source of support, so when the RSVPs seemed low, Yoni knew to focus on those elements in his control. The message was out there. The people would come.

The host synagogue had never run a blood drive before, but their enthusiasm for the opportunity was evident in the broad-spectrum push they gave the event. Other people Yoni met were just as generous, a kosher restaurant offered free burgers to those who donated, a gym contributed free visits, a writer/cook donated a cookbook, and one source funded the snacks for all those who attended. Support arrived from so many directions that the pressure for a success seemed to build as game day approached. 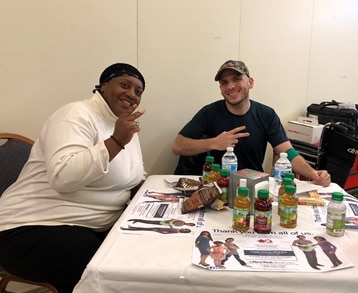 Two hours before the start, Yoni arrived at the hall, riding in on a rush of adrenalin, and ready to manage the set-up of non-medical necessities. On the blood center side, there were four beds for patients, four phlebotomists, a hospital ward full of related equipment, a registration table, and boxes of sterile bags waiting to be filled with blood. For Yoni, a waiting area had to be arranged, bathrooms located, a juice station and snack table set up, and goodie coupons laid out. He tried not to think about what might or might not happen, as expectations are known to drain energy. Still, he cared.

Then, when two young women were waiting to donate at 10am sharp, Yoni released at brief sigh. Almost as though they were scheduled, newcomers kept arriving every 10 to 15 minutes. Taking blood is not as speedy an exercise as getting a vaccination, for example, so the organic pace set by donors suited the bed and personnel limitations. Over the course of the day, from 10am to 4pm, over 40 people donated to the blood bank, a few draining their veins of twice the usual pint. Many more than that showed up at the synagogue, but for one of several reasons, their offer was refused. Usually that had to do with recent illness or travel to an area of the world where certain diseases are prevalent. In fact, 53 pints of blood constituted a massive success for the event, in particular because the blood bank ran out of storage bags and couldn’t have taken any more.

Since the blood drive, Yoni has become a resource person for others trying to pull off a similar community program. He has shared the process, the obstacles, the logistics, and the running of “game day”, all with the hope of “giving his project away” by transmitting related knowledge to those next in line. The blood, of course, will be used in due course for patients suffering illness, accident, or trauma. They won’t know where it came from, but hopefully, as they recover, the recipients will realize that someone cared enough to give it away.

“Who I am is generosity, community, energy, and integrity,” explained Yoni. This project was an expression of all of that. It focused on community, asked for generosity and required energy and integrity. “The blood drive was a way for people to be generous without reaching for their wallet. No money was exchanged at any point. The sponsors gave from their own space of generosity, and the donors gave a gift that can’t be bought. I feel very good about organizing an event that ran solely on personal and corporate generosity.”

2 thoughts on “Life Blood For Those Who Need It”

The Transformative Power of Classical Music

Landmark Forum graduates and others are taking up the Live a Life You Love Challenge, sharing about what they are up to, and what they are out to cause.