Morris Chubb says his ability to invent and create was always within him, but the fear of making a mistake had him stopped. He had always been cautious in his life, and had never taken the chance to step out and take his inventions anywhere.

His church was a part of a rotating homeless shelter. Along with others churches, it hosted 15 homeless people one month of the year. While there, they get hot meals, get to relax, and talk to church members. What Morris heard missing was these people spent their days looking for hygiene care. Most churches did not have showers available. At a meeting at his church, Morris got interested in what it would take to be able to provide showers so the homeless didn’t have to waste their day searching for them. He knew that showers could be made on a mobile platform so they could be brought directly to the homeless at the rotating shelter and perhaps to homeless encampments.

As he became more excited with his ideas, he thought to himself “Someone ought to do this!” But he was clear that someone was not him.

In late 2013, Morris had a meeting with a man who had done The Landmark Forum to talk about how Morris could possibly help him in with his business. He says the conversation very quickly became about Landmark. Morris said it sounded interesting, and registered for the course.

In The Landmark Forum, the leader asked him what he did for  living. Morris replied he was an accountant, a CPA and a CFO. The Forum Leader said “Of course you are! You picked the profession that has more checks and balances and is more careful about making mistakes than any other profession!” 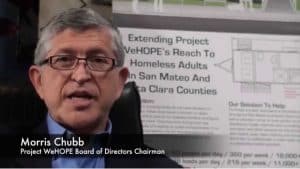 Morris realized his being careful was a direct result of the interaction he had with his father at the age of 4. He had tried to do something for his fathers benefit, but his father had not seen it that way, and the result was a huge mess. As Morris was punished, he made a decision that if he made a mess or did not get something right, he would lose the love and approval of those closest to him. As a result, he was forever cautious about everything.  He’d been very successful in his career and had made a lot of money, but he was never the one to stand up and make a difference.

In his Landmark Forum, he realized it was all a story. He got that what happened was that his Dad lost control of himself and it had nothing to do with Morris. He’d been being a loving son.

While doing Landmark’s Advanced Course and then the Self Expression and Leadership Program, he began to realize his idea for the homeless was not only inspiring but possible. Where he’d previously said “Someone else should be doing this”, he came that someone.

Morris has a friend named Charles who was homeless for the first 20 years of his life. He is now the City Team Men’s Shelter Manager in San Jose.  Charles told Morris that when he was homeless he would not have stood within 10 feet of him. This moved him. Morris says the homeless are as sensitive as we are to their physical condition. In fact, he says many of the homeless are completely disempowered by their physical state. They don’t search out work, medical or mental health care. In fact, they don’t do anything.

During the project’s creation, he realized that showers and laundry machines could both be put onto a  mobile trailer. He also decided to add extra clothing so they had something to wear while doing their laundry. Morris believes that a simple shower and washing of clothes is more transformational than just about anything else. He says those who live on the streets have often given up – some don’t even look for shelters anymore.

He named his project “Dignity on Wheels” (DOW) because he believes what happens is the homeless feel their dignity being returned to them. When a DOW trailer had been present in Redwood City, after only four months a San Mateo County Supervisor stated that the demeanor of the homeless was significantly altered as a result of them being there. Morris says he has heard of homeless people say after getting a shower and clean clothes “I can now go out on a job interview”. The trailers also have hygiene kits, sanitary napkins, and case managers who can connect the homeless to other services their counties could provide.

Morris and DOW used to have two naysayers.

The second naysayer was a San Mateo County Supervisor who told Morris “What you are doing is enabling the homeless by bringing the services to them so they don’t have to do anything for themselves.” A year later, this supervisor wanted DOW in Half Moon Bay to take care of the disadvantaged he deeply cares about.

When the project was being formulated, Morris went out into the community and told them what he wanted to accomplish. He was on the board of directors for a local non-profit that ran a homeless shelter in East Palo Alto. It was because of this association and his work with the homeless that Morris was invited to the initial meeting at his church.

The head of this non-profit is a pastor.  When Morris told him of his idea, the pastor said “This is a pregnant idea!” DOW was born. By the spring of 2015 they had raised about $100,000 from donors who were inspired by what they were up to. Morris then heard from his church there was a man who was looking to donate some money anonymously to this transformational idea. As it turned out, Morris knew the man and when they spoke, he said “Morris, my wife and I have been blessed with some money. We want to give you some for your inspirational project”. He donated $200,000.  The $300,000 raised was enough to build and operate the first trailer for two years. Dignity on Wheels became a reality in the fall of 2015 when their first trailer was delivered. 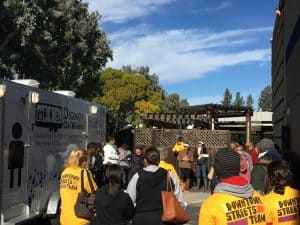 Sometime later, there was a breakfast for those who had supported Dignity on Wheels, and in attendance that day was a wealthy Silicon Valley builder. Morris says the event was amazing, but he noticed the builder wasn’t paying any attention to those speaking. He was instead playing on his iPad. Morris later learned he was connecting with the mayor of a major city and telling him he believed that DOW would be good for his city. By the end of the event, this builder purchased a second trailer for the non-profit at a cost of about $160,000.  And the mayor of that major city committed to paying all the operating expenses for the trailer.

To date the project has raised about $1.5 Million. A third trailer is under construction and they have a grant proposal with a notable social media company which might get them their 4th trailer. DOW has also done some rescue work for the City of Oakland for some residents of an apartment building that burned down. When Oakland and Alameda Counties got a sense of what was available for the homeless, they too want to contract with DOW, which goes to Half Moon Bay and as far south as Morgan Hill. They provide 4 hour shifts that can serve up to 24 people at a time before it moves on to the next location. Morris’ intention and commitment is to go to the same location twice a week as the homeless are deserving of a least two showers per week.

Morris’ commitment, he says, is also larger than working with community centers and churches. He would like to go out to the encampments. He says no one goes where he wants to go. The trailers are totally mobile. They have their own water, generators, and propane. DOW has the capability of going out into the marshes and that’s where he really feels called. He wants to get to the people who have the most need. The challenge is many homeless are not trusting and it may take the trailer showing up several times reliably before they will use DOW.

Morris says he learned in The Landmark Forum to be cause in the matter of life, but the biggest thing Landmark’s programs gave him was a voice.  He can now speak anywhere at anytime about the homeless and in front of anyone. He says he used to be someone who didn’t ever want to speak up for fear of making a mistake but says in his Forum be became aware he had made a story out of what just happened when he was 4 years old and how that story had kept him out of life. He is now unstoppable.

His dream is to have DOW trailers in major cities around the country along with a manager that will assist in duties from staffing to being a city liaison. He believes this can be a truly transformational experience for those communities.

Find out more at www.dignityonwheels.org, and watch the videos below.

2 thoughts on “Transformation on Wheels”