Richard Zinck: Learning to Live Life Instead of Win It 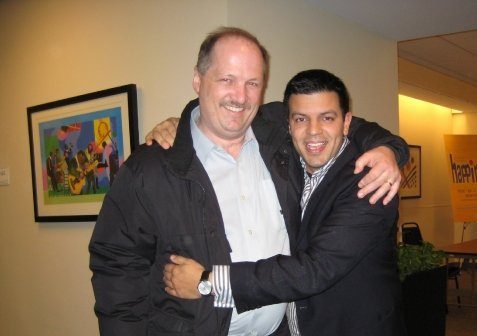 “I can change a whole industry without having to take it away from people.” – Richard Zinck

Why does an already successful businessman in Toronto, Canada, take The Landmark Forum? Well, if you’re Richard Zinck, it’s because of a desperate need to tell a story. “I wanted to speak so bad, and I was doing so poorly at it. I was so afraid to speak, for one, and my story wasn’t what people wanted to hear either. It was all about me winning and everybody else losing.”

Richard knew he wanted to excel at public speaking, but he didn’t know any other way to tell a story. When he met with a potential coach, the man promised to work with Richard, but he told him the first step needed to be his attending an event called The Landmark Forum. As Richard relates:

Richard still didn’t agree that his feelings were the answer, but he knew something wasn’t working, so he decided –grudgingly– to give Landmark a try in 2006. “So I went into Landmark with, you know, ‘I have to be there.’ And it didn’t take long, it was even the first day – I started getting stuff the first day. It was like ‘holy cow!’”

The past: when winning was the ‘Winning Formula’

Richard’s past successes were steeped in aggression, he acknowledges. One of five siblings with an abusive father, victory became Richard’s winning formula from an early age. “Because I was getting abused at home, I was angry. And I thought, ‘Stay away from people, because people hurt you.’ But when you go to school and you stay away from people, what happens is you become the outcast and people bully you.” Richard began standing up to bullies, first using his fists, and later winning with his wits. “I would outthink them. I took all of that power, all of the anger that was going through me, and I put it into my head. And I started to outthink them. …I learned that if people called me names, or if people threatened me, it made me smarter.”

Richard took that lesson with him into adulthood, creating a thriving lunch truck business by manipulating his competition into failing. “I got them to do whatever I wanted them to do so that they would lose their accounts. So I was using all that skill, but not in the right way.” Richard looks back now on his previous way of being and says, “I wasn’t a bad guy, I just learned that I could take someone who was a decent person and make them into a person that nobody would like. …And then I would become the hero, and I would get the business.”

Despite achieving one victory after another, Richard was rarely actually happy with his successes. “I won Entrepreneur of the Year, and then they nominated me for Canada, and I thought, ‘Wow, do I gotta go across Canada now and defeat people?’ …I don’t wanna ever do that ever again. And I’m getting it more and more every day: I don’t have to defeat people. I can change a whole industry without taking it away from anybody in there. I can show them all how to do the industry better.”

The present: listening with a ‘Beginner’s Mind’

“I don’t have to have all the knowledge. I just have to go listen. It’s all gonna work.”

Landmark gave Richard a tremendous insight into the way he could be in the world, he says. “When I took Landmark, I said, ‘that’s what I don’t like about business – you have to take from others to get something for yourself.’ And the leaders said, ‘No, no, no. That’s the way it works in your head. That’s not reality.’” When he compares his old conversations around success with who he is in the present, the difference is stark: “I knew how to plan everything. I would set everything up, and then go in and destroy. The difference now is – I don’t even know how to DO everything!”

One of his biggest breakthroughs was in being present in the moment instead of in his head, and for a guy who used to plan every interaction, that completely changed the game. “All the fear’s gone. I’m just me.” He went from being certain that he needed to have every contingency mapped in advance to focusing on listening and connecting to the people with whom he was in conversation. “I don’t have to have all the knowledge. I just have to go listen. It’s all gonna work.”

Sharing the spotlight lets everyone win

When other people’s successes no longer threaten our own, amazing things start to happen. One of Richard’s best examples of this comes from working with the landscaping company where one of his sons works. Out of Richard’s conversation with the boss, he created a new possibility: “I said, ‘Listen. Financial Post is going to do a story on [you]. And the boss goes, ‘Yeah, yeah, yeah. You just do your micromarkets.’ And I said, ‘I’m telling you, they are! I don’t know when, I don’t know how, I don’t know why, but they’re going to do a story on you.’” And from that declaration came a conversation about what the boss really wanted to say – “You tell me what you want, and we’ll get the story told around that.”

This focus on conversation and connection with others is revolutionary for Richard. And it produces results where no one loses. In this instance, the company owner wanted people to know that while his father had started the company, he and his brother had innovated it. And Richard’s new reality around listening had him replying, “That’s perfect!” And it was. “So that’s the way we did the story. And he framed that story, posted it on the wall in his office, and all of his big clients see it.”

If Richard’s past focus was on chasing business for himself only, he has now shifted to drawing business for everyone. Where he used to depend on certainty, he now confidently says, “I don’t know how to do it, but I’ll figure it out.” He listens. He tells stories. He looks for new ways of doing things. And he does it without feeling pressured to be anyone but who he is. “All the fear’s gone. I’m just me.” Richard knows he can succeed without dominating, and excel without forced pressure. “You don’t have to do that! That’s what I got from Landmark.” And he’s changing the landscape for doing business in Toronto while he does it.

Would you like to hear Richard speak from the heart? Here is a link to his “My Inner Child” story as part of the MoMondays™ professional speakers series open mic.

1 thought on “Richard Zinck: Learning to Live Life Instead of Win It”