Kingshuk Ganguly: Ending the Stigma of Rare Diseases in India 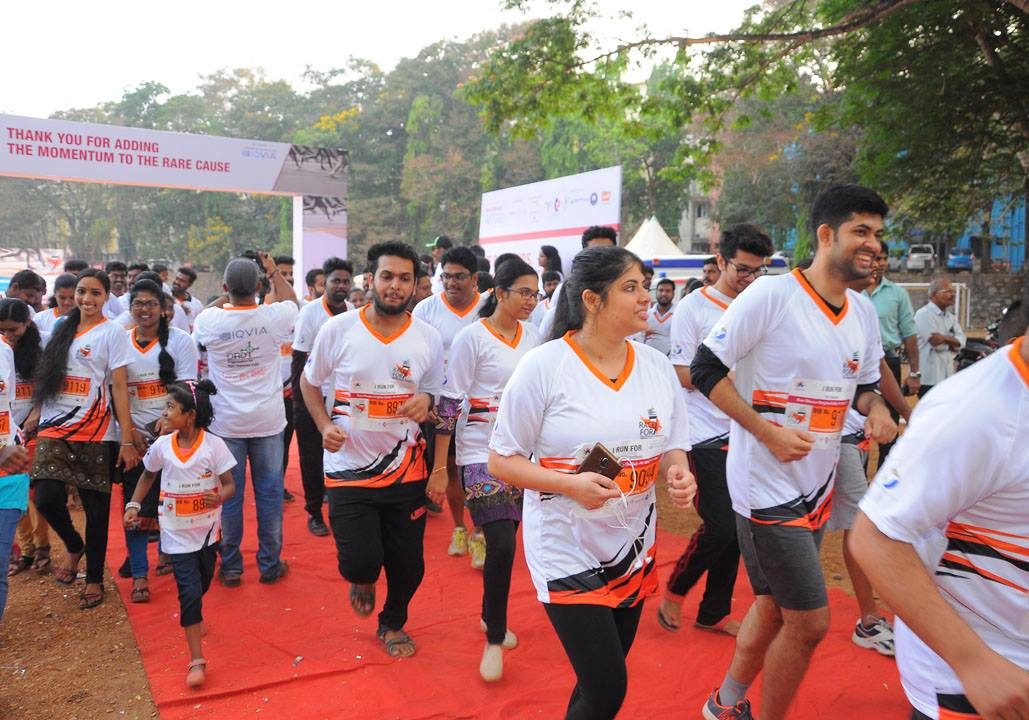 The World Health Organization has suggested that a rare disease should be defined as one with frequency less than 6.5-10 of every 10,000 people. In the USA, it is defined as any disease or condition that affects less than 200,000 persons. India, like many developing countries, currently has no standard definition. Considering its population density, the Organization for Rare Diseases India (ORDI, India’s national umbrella organization representing the collective voice of all patients with rare diseases in India) suggests a disease to be defined as ‘rare’ if it affects 1 in 5,000 people or less. More than 7,000 rare diseases have been documented so far, and in India, where 6-8% of the population is afflicted with a rare disease, that translates to approximately 80 million people.

Racefor7 is an annual awareness run organized by ORDI. The race involves 7,000 people running 7km to symbolically represent and bring awareness to these 7,000 rare diseases. Racefor7’s purpose is to “empower patients and their families with access to national and international resources,” and it all began out of one man’s Self-Expression and Leadership Program project.

Kingshuk Ganguly is a Landmark Graduate living in the Mumbai area of India. When he decided to take the Self-Expression and Leadership Program in 2013, he didn’t know exactly what he would create, but he knew where he wanted to begin – with the story of a friend’s daughter: “She had ear lobes but there was no hearing canal. My friend mentioned it as a ‘rare disease.’ He travelled the world trying to get treatment.” After an exhausting search, the friend learned of a treatment plan involving a bone conduction mechanism, and his daughter was able to hear. She is now part of the mainstream.

This story stuck with Kingshuk, who has two daughters himself. “While going through SELP, I decided to do something.” The biggest issue, Kingshuk says, is awareness. “People do not know about rare diseases. So people said, you know, ‘What is this?’ They weren’t affected by it, so why bother about it?”

Rare diseases carry a stigma of bad luck in much of India, leaving those affected by them feeling isolated and alone, cut off from their communities and the conversations that might shine a light on just how many people are actually effected. “So I said that the whole thing needs to be converted on its head. From a stigma to love and affection and normalcy.”

Running for a cause

“How do I tap the good intentions of people around me?” This became Kingshuk’s touchstone as he developed his project. And as he researched existing programs, he was surprised at how serious they all were. “There is no fun.” So he decided to develop the type of project he would want to see if he needed support – something fun, something focused on health and wellness and instantly recognizable:

“When I moved to fitness and fun, I thought that running is the simplest thing which everyone does. It’s harmless, it’s about fitness, and everyone understands running, across the globe in the same way. So how about I create a movement by which we just run. And then I brought in the element of running in honor of a family member of mine who has a rare disease. So that’s how I came into this project.”

The event Kingshuk developed was called ‘Run for My Valentine,’ and it occurred in conjunction with Rare Diseases Day, an annual event on the last day of February. Volunteers would run the Mumbai Marathon’s ‘Dream Run,’ a 6.5km non-timed fun run, with each runner representing a rare disease-afflicted person in their life. “I gave it a VALENTINE name because it’s close to Valentine’s Day and also so much about love.” The 2014 event garnered 60 volunteers who ran and raised money to donate to ORDI for treatment of children with rare disease in India.

Integrity to that cause

When asked about the most important thing that he learned from this project, Kingshuk is clear: a project is never over. “The majority of the 60 participants came in the last 3-4 days. I kept the belief that I can turn this around, and I am not giving this up, but for 95% of the time, I just had 5-8 participants. Then suddenly, like magic, the whole thing turned. So that was my first distinction, that a project is never over.” And the magic continues today – one bank where Kingshuk presented about his upcoming run in 2014 sent a few volunteers that first year. Today that bank alone sends 300 employees to charity runs.

During the course of his project, Kingshuk also got very present to the difference between attachment and commitment:

“So my integrity is to the cause, not to the money I raise. And I repeatedly coached myself, saying, ‘I need to do the race, and I need to do it for the kids. And not worry about the money I am raising or the struggle to get participants.’ So these are the two distinctions that I really applied.”

From ‘Dream Run’ to an international non-profit event

The ultimate goal of a Self-Expression and Leadership project is to give it away to the community it serves, and Kingshuk took this to heart. When developing his awareness run, Kingshuk created a vision document for his project. Connecting with doctors around the world led him to ORDI and its Directors, Dr. Vijay Chandru and Mr. Prasanna Shirol. Impressed with Kingshuk’s vision document and the project’s momentum, they agreed to take over and develop the program, engaging with stakeholders and bringing the race to multiple cities in India before making it international.

Commenting on ORDI’s Racefor7, the annual event which grew out of Kingshuk’s original ‘Run for My Valentine,’ Mr. Shirol says:

“From one city Bengaluru in 2015, we covered 10 cities in India, 4 cities in US and Singapore. We had more than 7000 runners participating in this exclusive Rare Disease event in India and in the world.  This has helped to create a mass awareness and we were able to reach more than 5 lakh [500,000] people through social media reach and more than millions indirectly through other media like Paper, news etc.”

How to get involved:

More information about Racefor7 can be found online.

If you are interested in becoming an ambassador for Racefor7 with your city or organization, or if you know an international athlete who would like to be involved, please contact Prasanna Shirol directly at: Prasanna(at)ordindia.org

1 thought on “Kingshuk Ganguly: Ending the Stigma of Rare Diseases in India”