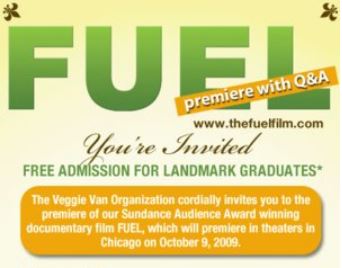 Fuel (see below) is on tour across the country, with special one-time shows at promiment theatres. The Chicago showing, coming on Friday, October 9th at the AMC Lowes Pipers Alley 4 (see poster below), is offering free tickets to Landmark Education graduates who rsvp to [email protected]. That showing is at 7:15pm and is hosted by Peter Fonda. There will be a Q&A session there along with the film. Here is the film tour schedule:

To get tickets and more details, go to http://www.thefuelfilm.com/theaters.php

“Thanks to an informative, buoyant tone and the director’s own restless intelligence, the film preaches to the unconverted with passion, energy and graphics so clear that they would make Al Gore  weep all over his PowerPoint.

Bustling with politicians, scientists and card-carrying green celebrities, “Fuel” reveals the terrifying complexity of our energy crisis, as well as Mr. Tickell’s commitment to the truth.”

Here’s an interview Tickell gave about the film earlier this year:

Be sure to read Landmark Education News’ previous story about Fuel, which contains a trailer from the film itself.