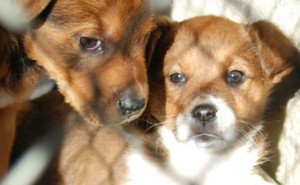 One Landmark graduate has made an enormous impact in reducing euthanasia of animals in Kentucky and other states. Margie Swift is out to cause nothing less than an evolution in human consciousness, whereby euthanasia is considered an unacceptable way to deal with pet populations. Through Swift’s participation in Landmark and through her actions, the Starfish Animal Rescue was established in 2010. Margie has been the catalyst for rescuing over 16,000 puppies, dogs, kittens, and cats from kill shelters–an animal shelter that has a euthanasia program.

Ending euthanasia may sound like a lofty, unreachable goal, but Margie is committed to the actions necessary to see this come to pass. She became involved with Safe Hands Transport, an organization that rescued thousands of animals, removing them from harm’s way after Hurricane Katrina. Many of the displaced animals were shipped north to Kentucky shelters.

One of the locations that received the animals was a kill shelter in Harlan County, Kentucky. In that shelter, an estimated 90% of dogs were being euthanized each month. Another shelter in Hazard County, Kentucky, contacted Margie for help. This shelter alone housed a number of animals equal to those usually held in four countywide shelters. They were euthanizing 800 dogs and puppies a month, with only 20-25 animals adopted from this group. Being an economically depressed area, there was no money for a spay/neuter clinic. But the story does not end there.

With the help of other non-profit organizations committed to the rescue, healing and placing of dogs, puppies, cats and kittens, and with Margie having enrollment conversations with individuals and organizations, she has produced incredible results. In 2012-2013, the euthanasia rate in the Hazard County shelter decreased from 90% to roughly 14%. During one month, no animals were reported euthanized at all.

Margie and her team of volunteers go on rescue missions twice each month. Their coverage area spans several states—Michigan, Indiana, Illinois, Wisconsin, and Minnesota. Rescue-friendly vets, who offer discounts, along with fundraising, offers people an avenue to help support this work. Various groups perform spay/neuter clinics. Margie organized the “Sponsor’s Spay Day” so people who want to help can in the form of money for these clinics.

Going forward, Margie is looking to raise money for a much-needed new van, to increase the rescue trips to three times a month, and to locate more animals in need.

Swift sees light on the horizon on many fronts. Earlier this year Chicago passed an ordinance banning all retail pet shops from purchasing animals from puppy mills. Chicago follows several other U.S. cities that have also passed laws banning the use of puppy mills.