Putting Landmark Ideas and Distinctions to Work in Distance Running 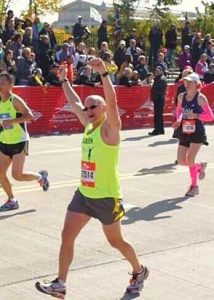 When it comes to chasing dreams, Darren DeMatoff has his running shoes ready to go. A Chicago businessperson and Landmark graduate, Darren has run 20 marathons worldwide, including 13 iterations of the Chicago Marathon. “It really transforms your conversations about what’s possible.”

When talking with Darren about running, he makes it clear that determination is key: “[It’s about] setting the goal without knowing how you’re going to do it, and then going for it.” Connecting to his Landmark experience, he adds, “Empty and meaningless is huge in that. I would have stopped so many times without that.”

Darren, who began his running career in 1995, knows how easy it is to fall into negativity after a bad run. Keeping that in mind, he deliberately changes his language: “Okay, that was a bad mile. This isn’t over.”

Darren uses the accountability and breakthroughs he finds in running throughout his life. Having been in business with his husband for the past 25 years, he says there is “so much evidence for where we could have thrown in the towel, but we just keep living into our future,” adding that there are “lots of opportunities to get off it and make each other right.” 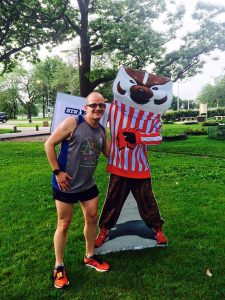 After returning from vacation in 1995 and looking at pictures (“This was back in the day when you had to get pictures developed,” he adds with a laugh), Darren signed up at a gym near work and began running on a treadmill. He soon registered for the upcoming ‘Shamrock Shuffle’ race – and he loved it. Sore and exhilarated, he immediately told his roommate he was going to run the Chicago Marathon, during a time in his life when he frequently worked twelve hour days: “I would go out at 2 a.m. to go running.” Even with the chaos, he did it. And then he did it again.

After running the Chicago Marathon for five years, Darren achieved the milestone of breaking four hours on his marathon time. Success in hand, he decided he was complete with running. Even still, after a ten year hiatus, Darren resumed marathoning, and since 2009 he has run one or more marathons each year. This year, he is running four. “It was never my plan, but I just kept smashing my own record.” Currently running a 3 hour and 22 minute marathon, Darren remarks, “I’m an hour faster and I’m 20 years older.”

Not every race runs the same, Darren reveals as he discusses his biggest running breakthrough.

“I was at mile 22, and I noticed I was slowing down. My thighs ached, I was tired. The voice in my head said, ‘You kept your pace longer; it’s okay to slow down.’ But then I had a realization – ‘wait a second, let’s actually check in with my body.’ And you know what? My muscles were NOT hurting more than before, my body was NOT feeling dangerously tired!”

Darren took nine minutes off of his time during that race. He knew then that he would run the Boston Marathon.

Aside from running his own business and running marathons, Darren also leads a marathon training group with the Chicago Area Runners Association (CARA). For the last nine years, he has worked with numerous runners, people pushing themselves and raising money for charities as they race. His current goal is completing the 6 Abbott World Marathon Majors. “I’ll get my six star medal in 2020 in London.”