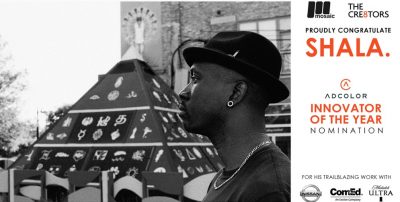 Shala Akintunde, a Landmark graduate and a widely recognized social impact artist, has been nominated for Innovator of the Year by ADCOLOR, the premier organization dedicated to celebrating and promoting professionals of color and diversity in the creative industries.

Each year, the ADCOLOR Award Nominees and Honorees are carefully selected from a large population of diverse influencers across the creative industries. This year ADCOLOR is presented by Facebook, Google, YouTube, Microsoft and Omnicom Group.

The ADCOLOR Innovator Award is presented to a remarkable professional who embodies progress and imagination. Someone who stands out among peers as a game changer and pioneer in their role, creating breakthrough developments and/or improvements, whether tangible or intangible.

Actress, producer and director of UnbeliEVAble Entertainment, Eva Longoria, is amongst the honorees, She will receive the first Annual Beacon Award for using her celebrity as a catalyst to change the status quo in the quest for diversity and inclusion.

Here is an ad featured in ADWEEK that was purchased by two agencies to acknowledge Akintunde for the honor: