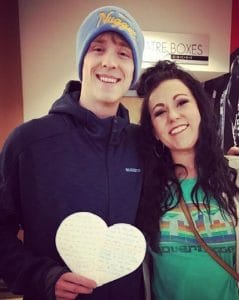 Three years ago, Lee Ramirez found a note on his windshield. At first, he panicked, thinking someone hit his car; but it turned out to be an inspirational handwritten note from a total stranger. He was touched, moved and inspired. But most of all, he was surprised how something so simple could completely make his day. Lee carried the note around with him for weeks and later dropped it on another car’s windshield, in an effort to spread the same happiness he felt.

After attending Landmark’s Self-Expression Leadership Program in October 2017, Lee decided to evolve this simple concept into his movement, Care For Three. This special project circulates handwritten notes of love, encouragement, and connection among friends, family, and strangers, with a pay it forward concept. The movement conveys that everyone deserves to feel loved and appreciated. According to Lee, “No one should ever feel alone and this project has the power to unite all.”

Many parents have had the opportunity to share with their children what true humanity looks like through a simple act of kindness. Youths are empowered by the project, and schools are searching for ways to teach them care and compassion; everyone deserves to know how amazing, beautiful and powerful they truly are.

There are many areas of this project that need leaders in order to see exponential growth. These notes are influential and they are reaching people all over the world, who are dealing with many of life’s struggles. Lee wants the project’s website to become a resource center for those who need help. Growing this project and promoting those resources will take some time; but with help, Lee is moving the needle towards global transformation.

Lee will always remember the original note he received and how it made him feel. So, when asked to come up with a project for the Self-Expression and Leadership Program, this was the first idea that came to mind. At first, he was hesitant to share it with the group, unsure if the idea was good enough and if people would want to participate. But he thought to himself, “Imagine the impact this would have on the world.” Once he overcame his biggest challenge, doubt, the project took off with ease. He realized that this idea could be a huge success. The first note he shared received a very positive response for its simplicity and its invitation for everyone to become involved.

The project is now rolling along with its name, logo, shirts, website, printable note templates, social media pages, news media coverage, pictures, and more. Lee enrolled an entire elementary school into the project, and the notes have traveled to more than a dozen countries, as well as all over the U.S. They have been translated into Spanish, Italian, and German, and an estimated 3,000 handwritten notes have been distributed. Lee is currently starting it in another school and expanding into large company participation.

When he walked into The Landmark Forum nine months ago, Lee was a shy and timid person; many say that this is not him anymore. He discovered many things along the way: his possibilities, joy, power, love, but probably greatest of all, he found himself. He has had many wonderful leaders, coaches and classmates in this journey.

Without Landmark, he says this project wouldn’t have happened. He did the Forum in May 2017, followed by the Commitment Seminar, Advanced Course, Self-Expression Leadership Program, Communication Course and, now, the Wisdom Course. He has overcome many obstacles along the way and has taken on each course with open arms. It has been an amazing journey of discovery and growth for Lee.

See also this NBC News story about Care for Three, as well as the project’s website.