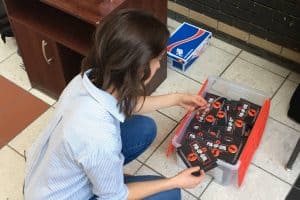 While news headlines about rapes and kidnap cases are commonplace, few people actually take active steps to protect the women. Steph Colangeli took decisive action in creating a rescue project called ‘Pin Up Girl’. This project is about an organization that started a little over a year ago in March of 2017 during her Self-Expression and Leadership Program. It is about women helping other women feel safe and stay safe in public places.

The basic concept is this: when a woman sees the pin she knows that the woman wearing it will assist and support her if she needs help, is being harassed or feels unsafe. It’s not common for women to be harassed and attacked when they are in groups of two or more. So simply walking with, standing by, or talking to another woman who feels unsafe or is being harassed makes a difference.

Pin Up Girl is also about empowering women to be leaders in their communities and make a difference in the lives of the women around them. Steph gets many requests from women asking how they can bring this to where they live, and have Pin Up Girls in their offices, schools and communities. They can take it on where they live and educate the woman around them about the pin and what it means to wear it with integrity and support one another.

Steph Colangeli created this because she has been harassed, followed, and felt unsafe many times in life. It was created out of what she saw was missing in the world. Steph has spoken to so many women like herself that have had similar experiences of feeling unsafe and alone, needing support and feeling uncomfortable not knowing where to go or whom to ask for help.

The pin is easy to spot and lets women know its ok to ask for help and very little has to be said between the two. “We as women are half the population and we can work together to keep each other safe and empower one another.” says Steph.

All the women wearing the pin are the participants of this project, there are over a thousand women wearing it around the world. There are pins across Canada, London, the US, Australia, India and Dubai. Some of the major contributors to Pin Up Girl are Melissa Molberg, Rummy Rendina, Alanna Niznik, Atalya Guerrero, Indrani Roy, Lina Granata, Natasha Hamilton, Marg and Doug Pettipas, Vince Colangeli, Theresa Grams and Greg Morton. Each in their own way has contributed to Pin Up Girl’s success.

One of the major hurdles whilst creating this project was the financial contribution to cover the small ongoing costs like a post office box and materials. They as a team aim to keep the pins free so they really had to sort out how to make that happen. Currently they have women mail a stamp to the P.O. box with their address and the team mails a pin back to them.

Another obstacle they face is making sure the pins don’t get misused and worn by someone intending on hurting or abusing someone. They can’t with any 100% certainty ensure that doesn’t happen, and that is something they are aware of and look for ways to change it. The hope is that if there is someone misusing the pin and violating the trust put in them that another Pin Up Girl will step in and make it right and call for help.

The team has accomplished a lot in this past year, they created a website, logo, mission statement and are gaining momentum. They also have women requesting the pins daily, and the more women wearing them the closer Pin Up Girl is to their goal of people being safe and contributing to one another. Steph has had the media contact her for articles and video features as well.

Moving forward they have plans to create purple pins for girls 18 and under and wants to be in schools, on campuses, in hospitals, and anywhere women are. They are looking to create a pin for men as well, as they know it’s not just women being harassed and needing assistance. Steph would also like to start meeting with women and men in shelters and halfway houses and talk about Pin Up Girl and The Landmark Forum.

“I am in the Introduction Leaders Program. I plan on becoming an Introduction Leader and speaking to women and men in need who have been abused or abused themselves and enroll them in taking The Landmark Forum to transform their lives and making what’s important to them available and possible. Landmarks contribution in Pin Up Girl is huge! Without my participation in this work, none of this was possible. My almost certain and probable future was to remain a ‘victim’ myself, at the effect of what I used to see as an unsafe world where I was unable to protect myself, or anyone else. I got in my Landmark Forum I am strong, capable and powerful. I would never have created this organization without my participation in The Landmark Forum, Advanced Course, Self Expression Leadership Program and Introduction Leaders Program.”

For more information, read this Global News story on what she has created.