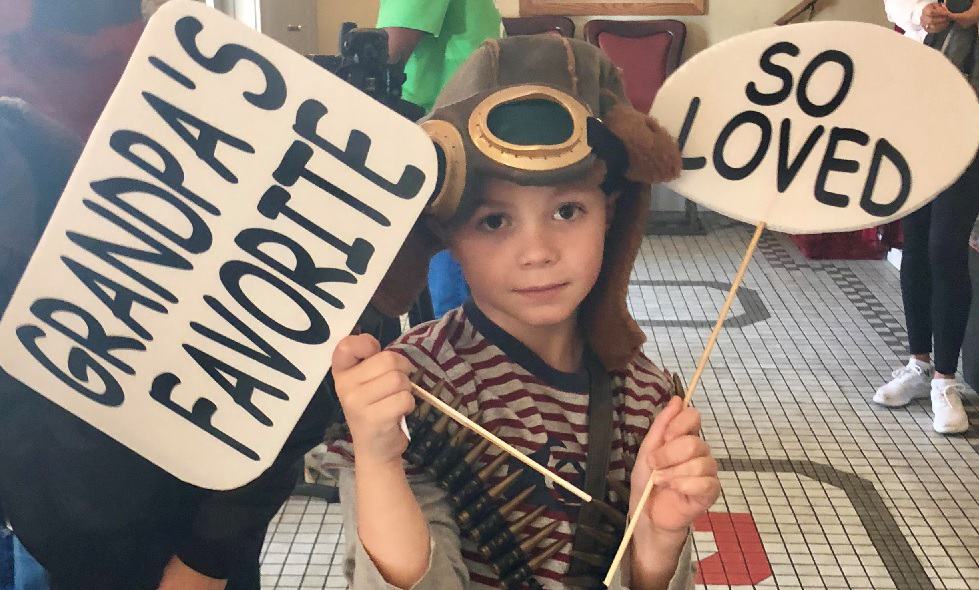 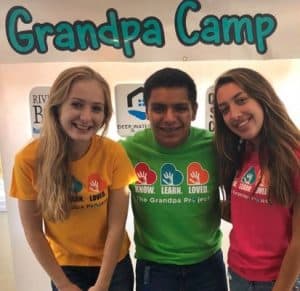 Grandpa and Easton were best buds from birth. Easton’s, not Grandpa’s, cuz that would be silly.

Every evening when Easton’s mom and dad were visiting Grandpa, the tiny boy would reach out his arms and Grandpa would gather him close.

It felt warm and safe and happy. From those early days, Easton heard Grandpa’s deep, rumbly voice saying, “Hey, fella, how are you doin’ today?”

Even before the baby could talk, he would gurgle a reply, looking up at the man with a round face, white hair, and a pillow in his belly.

As East’ grew, the two played “Patta cake”, “Itsy Bitsy”, and “One Potato”. The toddler giggled and then roared with laughter whenever Grandpa crawled his fingers up the boy’s leg and then tickled his tummy. “Here’s a little bunny, hopping up to bite your tummy.”

Playing with Grandpa was the mostest fun ever, because he could be Grandpa and a lot of other people. When Pop Pop read about a witch, his voice would sound scary and strange. When he read Winnie the Pooh, Grandpa turned into a little bear. So many funny voices that it seemed East’ had a 100 Grandpas.

Something happened, though, as the little boy grew and started racing around, playing catch and chase, climbing up, falling down, and running by the river.

Easton got faster and Grandpa slowed down. Sure, they still ate together, drove around together, road the jet-ski on the lake, and sat side by side in the living room. Many an evening, Easton chose books and perched on that big, comfy lap for a nice long story time.

But daytime was playtime, and grandpa preferred to sit. Outside, where the sun was shining and the park was just a block away, Grandpa made excuses. “You go ahead, buddy. I’ll be there in a while.”

Soon, whenever an outdoor activity beckoned, Easton would look back at Grandpa and kinda shrug his shoulders. Then, off he went. Life was calling and Easton had to answer. 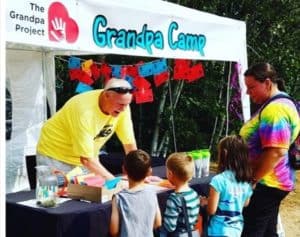 The above is a children’s story depiction of an aging and life-changing reality, one that confronted Landmark Forum graduate Rod Brooks several years ago. He loved his grandkids, including little Easton, but didn’t have the energy to take part in all their activities. Fortunately Fortunately, Rod’s son saw what was happening and cared enough to talk truth. “Dad, we come from several generations of men who die early. You never got to know your own grandfather, nor I mine. I want my children to know you and they won’t be able to if you get sick or die early due to ill health and bad habits.”

Rod Brooks took a deep, tremulous breath and willed himself to look in the mirror and make some changes. In time, of course, what Rod called his Grandpa Project paid off with health, weight loss, and energy galore. And that would be a great story to tell in detail, but Rod has done the extraordinary; he has breathed a so much more expansive life into the Grandpa Project that it has morphed into a movement to bring all children their own “Grandpa experience”.

This is the tale of an evolution, how an idea, like a little boy, grew, and changed and became a great deal more. Out of the SELP program at Landmark Worldwide, the original Grandpa Project, a personal mission toward health and greater involvement with family, transformed into Grandpa Camp, a project through which all children would have access to a genuine “Grandpa experience”. 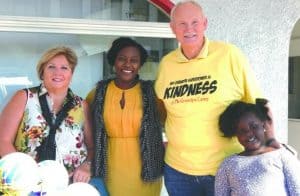 Rod Brooks realized that grandfathers are people apart. Long before Norman Rockwell memorialized grandpas in magazine cover art such as “Grandpa and me raking leaves,” or “Grandpa and me fishing,” grandfathers have been honored as sources of learning, love, solace, fun, and activities. The ease, love, and comfort of these bondings are distinct from all other relationships. Indira Gandhi, the former prime minister of India, gave proof of grandpa’s wisdom when she shared, “My grandfather once told me that there were two kinds of people: those who do the work and those who take the credit. He told me to try to be in the first group; there was much less competition.”

Gray-haired or bald, wrinkled or stooped, a grandpa is an island of acceptance and love in a life that can be fraught with the natural conflicts within families. Not long ago, during his time in the SELP, a hale and healthy Rod recognized that grandpas were losing their traditional place in the family dynamic, not simply because of ill health, but also due to lack of connection. He determined to strengthen that tie by focusing on grandpas and grandchildren and providing a way for them to celebrate together.

Rod Brooks exudes confidence and enthusiasm as natural characteristics, but even he was surprised at the response to his idea of a Grandpa Camp and his requests for assistance. “Making bold requests and sharing yourself is what makes the difference,” he says. Soon he had a venue for the Grandpa Camp, a theater in Chelan, Washington, activities planned, plus a logo emblazoned on colorful tee-shirts and posters, the blessing of many in the community, and an entire team of helpers.

On the day of the first ever Grandpa Camp, October 6, 2018, people arrived at the theater in pairs.

“It was quite a day,” Rod recalls. “I saw as the kids and grandpas arrived, they were all walking hand-in-hand, in stride together. You could tell the young ones were proud to be there with their grandpa. Grandpas registered, filling out a form. They had a hard time holding back emotion. Each grandpa was asked to share “your favorite grandpa story.” So powerful were those memories that the grandpas got choked up. They hadn’t even gone in the building yet and they were almost in tears.”

Yet, joy was the order of the day as grandpa and grandchild dressed in vintage costumes and posed for souvenir photos. The pairs were thrilled to be “getting a photo of us.” The event comprised both a community and pair dynamic, wherein all participants were happy to be there, but the pairs concentrated on each other, on their special bond. Rod watched as each set conversed back and forth, creating a happy collection of Grandpa/child bubbles in the large, lively space. Those bubbles formed the essence of the “Grandpa experience”, the core of what Rod hoped to see. Kinship unfurled like family flags as the duos sat together during the movie, munching popcorn and laughing, and later constructed paper airplanes, folding sheets of paper and shooting the finished product off the balcony. It was hard to tell who was having the most fun, the kids or the Pop Pops.

Grandpa Camp was a success in so many ways, but the true tell has been the ripple effects. Since Grandpa Camp, Rod Brooks has talked to school principals, school district supervisors, reporters, grandpa volunteers, and more people than he can remember.Grandpa Camp is now a movement, a relationship building campaign whose time has come. Plans have already been made for Grandpa Camp 2019, but also for a variety of other grandpa doings. Collective grandpas for elementary classrooms, perhaps, to teach, talk, and hug. Grandpa Memories on youtube or the radio. Rod Brooks sees endless opportunities to bring the eldest in any family together with the youngest and to watch them grow together.

2 thoughts on “The Birth of Grandpa Camp”