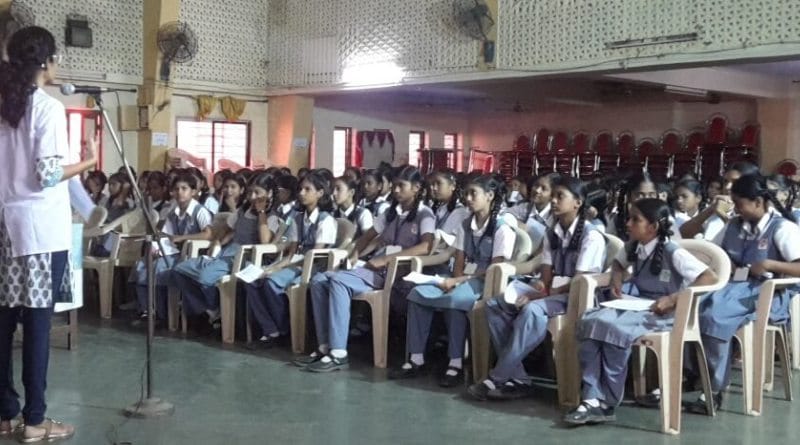 A project created in the Self-Expression and Leadership Program is providing key health information and sex education to Indian teens.

Mr. Dhruv Kalawadia believes that sex education is a very important part of the syllabus as well as a sensitive topic for senior secondary students; it will be of great help to the students if these topics are discussed by doctors who will be able to solve their doubts about their own bodies and clear any misconceptions regarding the same. Menstrual hygiene is an integral issue of Public health, and teaching it to girls at school level will help them to protect themselves from several fungal, bacterial and parasitic infections. He had an idea about various students asking questions regarding health issues and being able to get their doubts cleared on the spot by the expert doctors.

This project, which he created in Landmark’s Self-Expression and Leadership Program, started in the month of March as an initiative for International Women’s Day. He decided to provide this sensitive yet integral information to students between teenage groups of 12 to 15. He talked about the Indian taboos: “we have plenty of misconceptions surrounding the topic of sex and menstruation. These misconceptions are carried by students into their adult life and then from them to their own kids. It’s high time we clear these notions and provide accurate information to these students who rely mostly on the Internet and other older people with the same misconceptions for such information.”

Venereal diseases and menstrual infections are rising rapidly in India and are a major public health concern which are best dealt with at early ages. He realized that all of this could be prevented by providing an hour lecture to these kids to break misconceptions, live healthier, and all together make better parents and citizens.

The schools that they have approached have been surprisingly receptive to their initiative and have provided them with all the support they needed. Their target group has been Marathi medium schools, in India. They have conducted seminars for two schools as of now, and reached out to about 500 teens between the age group of 12 to 15. They also started such programs in the city of Pune to be able to reach target schools and children there.

Their aim for the future is to make it an all India initiative. They believe this will help solve a lot of issues regarding India’s ongoing population explosion. The WHO (World Health Organization) also has dedicated this year to empower woman and through their initiative they would like to support them in this endeavor.

Dhruv acknowledged the Landmark Self-Expression and Leadership Program, saying, “Landmark has given me an axis to be able to put my ideas across to the Indian masses and have them consider this as possibility for a better society and all together a better nation. Through Landmark I have gotten the confidence and will power to turn this project from a burden into a possibility.”