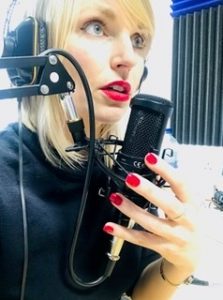 Emily Kennedy Barnes is the first to admit that she wouldn’t be where she is without the instruction and coaching available through Landmark Worldwide. “Everything that is going on in my life wouldn’t be happening without the training of Landmark,” Emily insists. The skills developed in the rooms, from the Curriculum for Living to the Introduction Leaders Program, paved a path for dealing with people, new challenges, and obstacles. Where Emily Kennedy Barnes is now is in front of a microphone doing standup comedy, at the helm of a well-received podcast called “Funny for a Woman”, and in the middle of a Masters program in digital and visual arts. Her life is a wildly creative lab that she savors and labors over daily.

The genesis for “Funny for a Woman” stretches back several years. It arose in a Self-Expression and Leadership Program project Emily put together to raise money for Brighton Women’s Centre in Brighton, England. An all-day community event she created came to fulfillment with activities, acts, speakers, and booths of all kinds. In promoting the project, Emily gathered 20 female assistants, willing partners who communicated, built, and managed all aspects of the day. In watching the work unfold and the women collaborating on behalf of other women, she recognized that sisterhood was a powerful tool and that her simple requests had enabled this human engine of activity to manifest and serve.

In the process of that enterprise and others in her life, Emily gained production, promotion, and media experience that, eventually, she aspired to apply to something new. Not surprisingly, the idea coalesced around women and their stories, and then funny, artistic women and their stories. Comedy is an overwhelmingly male-dominated industry in Britain and elsewhere, with women holding only 10% of the stage. In real terms, what this means is that a woman’s style, message, and humor can easily be lost or never heard. “Funny for a Woman” speaks to that reality, not as a confrontation with men, but as a space for women. 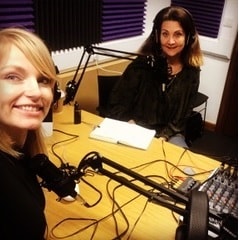 “I am inspired by so many women, many I have collaborated with over the years and others whom I’ve heard and admire.” Thus, the list of possible interviewees for “Funny…” was miles deep and hilarious. The first interview, with Charmaine Davies, delivered a basic format by promoting the artists future, current, and past work amid easy banter, laughter, and chat. As the program progresses, Emily probes into the guest’s early, beginning efforts at comedy. “What would you say to that woman who took on standup seven years ago?” The answers are all different, the same, and very personal.

Charmaine’s response was “Getting into standup was a bit of an eye opener really. It’s quite a lonely little industry. You might be out there with a lineup of other people, but you are really on your own.” That reality, one that exists in many fields, is where the growth has to happen. The women on “Funny…” provide a 101 course in personal development, living with rejection, speaking from their truth, and being in service.

I asked the same “What would you say to…?” of Emily, though her life in comedy is of shorter duration and occasionally interruptus given her child, her studies, and other projects. Without a beat, she responded, “I would let myself off the hook more. I would allow myself permission to not fear failure. Choosing to feel that and do the work anyway.” These precepts have held true for Emily’s standup work, her university studies, and the maturation of the podcast. Failure looms in any endeavor, and at its feet millions of ideas aborning have shriveled and died. Emily is not out to conquer fear of failure so much as pushed into second place behind a more compelling desire. In the case of comedy, that is “The want to make people laugh has to outweigh your fear of failure.”

The response to both her standup and podcast have been positive, heartwarming, encouraging, and of course, outrageous. Out of that Emily has created a Comedy Surgery night where experienced comedians will help others who want to make the leap but don’t know how or who have great ideas that are not quite ready for lift off. Currently, she is promoting #66DaysOfLaughter on the “Funny for a Woman” Facebook page. This two plus month chuckle campaign “is dedicated my mom who would have been 66 this year.” Visit the page and post your own funniest cartoon, joke, photo, or personal disaster. Next, download “Funny for a Woman” from iTunes or your favorite podcast distributor.

Emily Kennedy Barnes consciously works toward a day when gender doesn’t come into conversations around comedy, when funny men and funny women arouse equal interest in the culture and the marketplace. Alas, that moment hasn’t arrived, so she continues to spin a funny, fabulous, feminine web at open mikes, in front of audio equipment, and in comedy lineups around the country.

2 thoughts on “The Important Business of Being Funny, Fabulous, and Female”