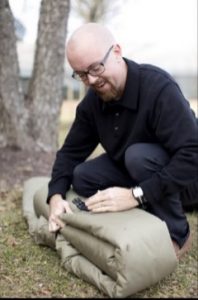 You are invited to open the freezer and stick your hand in for an hour or so.  For those who have no escape from it, cold is both meaningful and painful. Chattering teeth and spontaneous shivers are two of the ways the body tries to create life-sustaining warmth. In freezing or chilly weather, an internal survival system pulls blood from the extremities and strives to keep the core warm, leaving hands and feet icy and tingling. People who live outdoors in the elements, such as at least 25% of the homeless across our nation, are in a persistent and often futile struggle to maintain a healthy body temperature. Now, in the middle of winter, the weather conspires against these folks daily. Fortunately, there are people on a mission to generate warmth for those caught in winter’s freezing clutches.

Mike Mondy, a real estate agent in Columbia, Maryland and current participant in Landmark Worldwide’s Self-Expression and Leadership Program, focused on the homeless and their challenges as he designed a project that would make a measurable and sustainable difference for the homeless in his area. In pondering the options, a coat campaign seemed one route, but it didn’t fully resonate. Soon Mike recalled an article he had seen on a different kind of coat, one that served as both a warm outer garment and, at bedtime, a toasty sleeping bag. What he had remembered was the EMPWR coat, launched and produced in Detroit by the Empowerment Plan, a nonprofit that has provided 25,000 coats for the homeless in the six years since its inception.

Long before Mike Mondy made the first call to the factory, the Empowerment Plan had worked with dozens of organizations desirous of contributing positively to the lives of destitute people. As a result, the company has devised resources that make new campaigns ‘plug and play’, easy and accessible. Calling his personal project Warm for the Winter, Mike wasted no time in setting up a Facebook page and funding site, using media and coffee klatches as well as word of mouth to get the word out. Within days, donations began to accumulate, converting the Warm for the Winter project from pipe dream to presence. 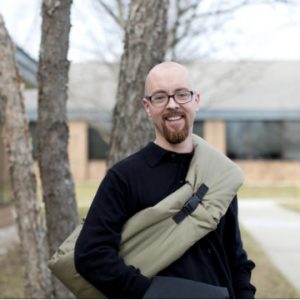 Focusing on Laurel, Maryland, which sits halfway between Baltimore and Washington D.C., Mondy contacted the Laurel Advocacy and Referral Services, New Day Laurel, and Laurel Winter Shelter to find out where the need is greatest. In addition to the 100+ homeless served by shelters and other organizations, there are many more living in the woods or in their cars and surviving in temperatures that drop well below freezing for months at a time, particularly at night. Cold is not simply uncomfortable; it is cunning and destructive. Victims of ongoing homelessness and repeated hypothermia often incur skin lesions and infections from a lack of bathing, cracked, bleeding and inflamed knuckles known in Dickens’ time as chilblains, and cognitive lapses resulting in confusion and impacting judgment. Some of these folks are addicted or mentally impaired, and are thus less amenable to partaking of resources within four walls. This is where the EMPWR coat can be a literal lifesaver – extreme temperatures cause death. In fact, one of the 100+ donations to Mike’s fund-raising website was made “In memory of the unidentified man – thought to be homeless – found deceased in Calverton, likely from exposure.”

Publicity and dozens of one-on-one conversations attracted interest early in the campaign, bringing forth a benign flood of concerned and caring parties. Mike says he was surprised that aspects of this venture were relatively seamless. “It resonates with people,” he says, “and sells itself.” The Baltimore Sun came to call and wrote a long, positive article about Mike and his Warm for the Winter mission.  Dozens of single-person donations followed the article, boosting the fund’s total sufficiently to order a first batch of coats. The Laurel Police Department, too, saw the value of the project and the coats, going so far as to create a video to encourage donations. LPD’s aim is to have a coat stored in every police cruiser, handy for those emergency situations that law enforcement faces daily. At one happy point in January, Mike loaded his car with 30 of the hefty garments and transported them to the local shelter for distribution.

The EMPWR coat, which takes hours to assemble, is constructed of donated industrial materials, including water-resistant Cordura fabric and automotive insulation donated by General Motors. Formerly homeless women, trained by the Empowerment Plan as seamstresses and now employed full time, put all of the various parts together, creating a durable and snug garment, one with a surprising something extra. By releasing an extra layer at the back of the coat and letting it drop, the wearer finds a long, wide pocket, perfect for legs and feet. Then, with the Velcro on the jacket smoothly closed, the sleeping bag is complete. As a bonus, especially for those who tend to move from place to place throughout the day, the coat rolls up and hooks. It can then be worn cross-body and kept safe for the next night’s use.

To date, Mike has raised over $7,000 on behalf of the homeless in Prince Georges County, enabling the delivery and distribution of 75 coats. Even when winter fades, Mike doesn’t intend to stop, forecasting a similar campaign in Baltimore and its much larger population.    He credits Landmark Worldwide, the Self-Expression and Leadership Program and its committed leaders, Phil Thomas and Denise Economy, with guiding him to a path that distinguished between Commitment and Attachment as he created Warm for the Winter. Through service to others he experienced the reality of a life transformed.

Watch this news story about the project:

3 thoughts on “Warm for the Winter”