“It was me as me…it doesn’t matter if it was just me alone. I came out to do what I said I was going to do. I stood in my word.” – Ulrich Floresca, Co-Founder and CEO of Zer0 Debris

Landmark Forum News is committed to sharing inspiring stories of Landmark graduates in the world being with ‘what is’ and creating extraordinary possibilities. One such graduate is Ulrich Floresca, co-founder and CEO of Zer0 Debris, a California-based nonprofit whose mission is ‘to pick up trash and debris which are harmful to all living organisms, from the shorelines of oceans, seas, lakes, and any body of water that has life in it…To touch, move, and inspire the world as to what a clean shoreline can do and how it can benefit not only our humanity but also the marine life that co-exist with us and from which we get our sustenance.’ The group is committed to continuing this mission ‘until we rid the beaches of all forms of contaminant. Until it is ZERO DEBRIS.’

Zer0 Debris, which has been operating since January 2018, began because of a conversation. As Ulrich approached his 48th birthday in 2017, he knew he wanted to do something special, but he wasn’t sure what. He then posed the question to his social media community: ‘Who wants to do 48 acts of love and kindness in the world?’ 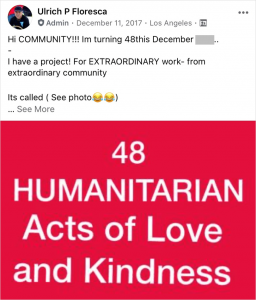 “I got a lot of likes from that, but I never got any ideas.” Ulrich shares with a laugh. “I was looking for a big, heroic thing, you know, like, ‘Here’s what I did! I conquered this!’ But in the mundane, something sparkling came about. And that is Zer0 Debris.”

When an in-person conversation with another Landmark graduate gave Ulrich the idea to go to the beach and pick up trash, he asked if anyone wanted to join him on the California coast that December day. And one of his closest friends, Hamid Pezeshkian (co-founder and president of Zer0 Debris), was an immediate YES.

“Hamid replied ‘I am down, bro! I’d like to do this.’” Ulrich remembers. “So we picked up bottles on the beach. And then he said, ‘Let’s go invite people, let’s go enroll people!’” And Zer0 Debris was born.

From birthday outing to transcontinental teamwork

When asked how long it took to transition his birthday idea from outing to official nonprofit, Ulrich laughs, exclaiming, “It took a week!” Then he breaks down the timeline a bit further: “We met December 16, and it was just me and Hamid, and we were just picking up bottles at the beach.  The following day we registered as a nonprofit with Los Angeles county and January 24 of 2018 we started our first month.”

Everything the group has–the canopy, the shirts, the website, social media pages–comes from donations, both from Ulrich and his teammates as well as some amazing collaborator-organizations. As for what the team does, it’s ultimately very simple: “We’re doing what we said we were going to do, and that is to give up 4 hours of our time once a month to clean up the beach.”

Ulrich made a commitment, and he has stuck to it, month after month, year after year. He has found that being true to your word often inspires the people watching you to want to join the game, too. It certainly has been the case for Zer0 Debris:

Breakdowns and breakthroughs and family bonding

When asked about the breakdowns he has encountered, Ulrich doesn’t even need to pause to think:

For Ulrich, keeping his word is a team effort. He instantly credits his sons, Ethan and Dylan, as being instrumental to his success, saying, “They are the ones that hold me accountable. They are all dressed up while I am still asleep!” Both boys are also Landmark graduates, Ulrich adds. “They understand how it is to be your word, how it is to be of service…They have the heart of what it means to serve, to give back to the world.”

Ulrich says that participating in Zer0 Debris with his sons “gave me an opportunity to really know my boys…I feel so accomplished that this has helped open their eyes to what the world is and what the world can be to people when we stand for something greater than ourselves.”

Being Zer0 Debris in the face of ‘what is’ today 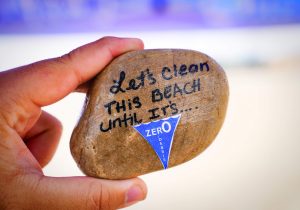 Between Landmark Forum News’ first conversation with Ulrich and our follow-up, the world of ‘what is’ for the state of California changed significantly. With state and federal recommendations to practice social distancing, Ulrich realized his team had to make a decision about their scheduled March 15 clean-up, and they did–for the first time in 27 months, “the Zer0 Debris event was cancelled by the whole team, it was agreed upon.”

But Ulrich realized something else – he could still look for a way to be his word, even in the face of a very large ‘what is’:

“So it’s official, it’s cancelled. But what I did is, I went to the beach. Unofficially official. No tent, no set up. It was me as me. I was just me, cleaning, picking up stuff. One good friend came and said ‘Can I join you?’ And I said ‘Yeah, but it isn’t Zer0 Debris!’ So to answer your question, it doesn’t matter if it was just me alone. I came out to do what I said I was going to do. I stood in my word.”

In the face of a massive breakdown, in the face of a ‘what is’ that left Zer0 Debris with a moral and societal obligation to make the choice not to gather as a group, Ulrich Floresca still showed up and kept his commitment to himself and the world. 12.2lbs of trash still left that beach that morning.  Zer0 Debris still made a difference in March 2020. Congratulations! 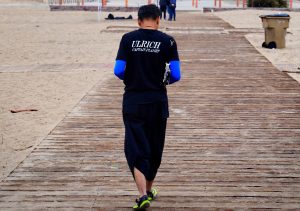 If you’d like to learn more about Zer0 Debris, you can connect with the nonprofit organization online.

Landmark graduates around the world are making a difference in their lives, their families, and their communities.

5 thoughts on “Ulrich Floresca: Cleaning Up in the Face of ‘What Is’ with Zer0 Debris”