Transforming the World, One Stream at a Time

An acclaimed Landmark graduate's documentary on violence is now on Amazon, as well as being screened in Minneapolis on August 2nd. 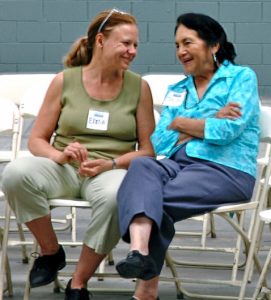 Also, there’s an upcoming screening in the Minneapolis area, at the Spring Lake Park High School Fine Arts Center on August 2 at 6:00 pm. (1100 81st Ave NE, Minneapolis, MN 55432) This high school is a setting for several powerful scenes in the film, and several key people highlighted in the movie will be in attendance.

Admission is free and the director Ellen Snortland, and her husband, Ken Gruberman, the film’s music supervisor, will be there as well for a lively Q&A following the movie. (If you’d like to attend, you can show up at the door, or indicate your attendance by visiting the event page here.

From its very beginning, Beauty Bites Beast has been a work of love that is solidly based in Landmark distinctions and coursework. Author and filmmaker Ellen Snortland participated in the est training in 1973 when she was 19 and has lived her entire adult life with the experience that the est training and later, the Forum, provided her. She wrote her ground-breaking and respected book, Beauty Bites Beast, after she surprised a burglar who was ready to plunge a knife into her. She screamed, he ran, and rather than having the burglar with the knife terrify her into getting smaller, she took that experience and transformed it into a miracle that became the book, and now the film based on it. The book Beauty Bites Beast was featured on Dateline NBC, and is now in its 3rd edition.

The book and film are also a potent example that one person really can make a difference. Because another Landmark graduate read the book Beauty Bites Beast, he invited Ellen to come down to Tijuana, Mexico, to train the women who worked for him in his factory so they could learn to set emotional, verbal and physical boundaries. That training in 2006 was filmed; soon after, Ellen stood up in her Landmark Graduate seminar and promised that she’d make a movie based on that footage. At the time, all Ellen had were some tapes and her word in the matter. The women who trained in the factory became the spine of the documentary version of Beauty Bites Beast. The film also includes women in Kenya, India, the US, and Israel. It has been screened in Jerusalem, Islamabad, New York, Chicago, Los Angeles and now, Minneapolis.

Ms. Snortland has experimented with a genre which she dubbed “enroll-tainment.”

“I am committed to having people walk out of the theater uplifted and taking action about a persistent and damaging set of gender beliefs that has some men acting violently toward women. Family lives are up-ended by violence over and over. Gender-based violence is an inherited conversation that we have not yet dismantled as a human family. Beauty Bites Beast takes this daunting prospect head-on in an entertaining and inspiring way. It includes men as part of the solution as partners. I get emails saying, ‘I understand how I as a man can now help end violence; I felt so included in this movie!” or ‘If I’d not seen your movie, I’d be dead right now.’ So many people don’t want to confront their ingrained beliefs that has violence stay in place. Beauty Bites Beast creates a whole new realm of possibility, all because of the work I’ve done with our enterprise for 40+ years.”

1 thought on “Transforming the World, One Stream at a Time”