For the first time ever, on June 8th-12th, The Landmark Forum was held in Brasilia, Brazil's capital. 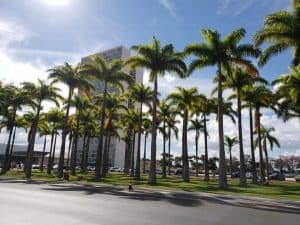 Perhaps more than any other recent Landmark Forum, the launch of the course in Brasilia became a proving ground for the ideas and training of the course itself. Led by a twenty year Landmark Forum Leader, Ria Bauhofer, the course was a first in several ways. This was the initial foray into Brazil’s interior, bringing Landmark’s programs 600 miles inland from Sao Paulo, where Ria has led several Forums previously. The metropolis of Brasilia has long been a feat of creativity, endurance, and effort, having been carved out of the wilderness and built from scratch. Modern architecture and innovative design, including specific sectors for varying activities, have resulted in Brasilia, at the age of 62, being declared a UNESCO Heritage site.

It was only ninety days from the time it was decided to take the Forum to Brasilia and the first day of the course on June 8th. Three months to find a space, negotiate for its use, review the area for hotels, transportation, and amenities, organize facilitating teams, train them, create all necessary packets and paperwork, publicize the weekend and register participants. Six weeks in on that deadline, many tasks were handled. Unfortunately, the one element that wasn’t coming together was registration. As Ria explained, six weeks out from the first day of the course, only 18 people were registered. This wasn’t a failure in terms of task; all the right things were being done. It was a gap of another order all together.

Ria has been at the front of the room during Forums all around the world. While The Landmark Forum remains the same wherever it happens, local culture sometimes has a quirky impact. In Turkey, for example, which has a fragile balance between freedom of expression and possible repercussions, people watch what they say, sharing freely only up to a point. In Mexico and Brazil, both comprising large and devout populations with embedded religious traditions, the concept of integrity “doesn’t exist as a distinction,” says Ria. It gets conflated with morality, and that slight variant can take the training off course. Ria has extensive experience with getting the group back on track. Still, these cultural beliefs are a force to reckon with.

It was another of Brazil’s cultural idiosyncrasies that threatened to derail the entire course–niceness. It might not seem that being nice is a problem, but, as Ria observed, being nice reined in momentum in terms of the registration team. One of the managers of that team, a committed young man, was struggling to fulfill on his word. Contacts were made, but registrations trickled in very slowly. The manager had a breakthrough, where in Ria’s words, “he really got access to being a leader and that one of the ways it was expressed was that he could be demanding of people instead of being nice. Especially in Brazil, where everyone is just nice. He got what it meant to be cause in the matter.” Standing in the space of being cause in the matter is a core distinction, like integrity, an idea that has to be understood viscerally, not merely cognitively. In two weeks, 70 more people registered, and by day one, 155 were in their seats.

Not only were 155 people in their seats, but 97% of those who were ever registered showed up for the course. That was a major accomplishment, and it made manifest the cohesion of the entire process: enrollment, registration, fulfillment, and attendance. That attitude was reflected in the sharing, partnering, and even in the return after breaks. Brasilia was on time and ready, every time, with everyone prepared to participate fully.

The video below, with comments from many of the participants expresses the joy, possibility, and victory discovered out of this Landmark Forum, the one that almost wasn’t. Ria Bauhofer, for one, came away with a renewed appreciation for the Brazilian people’s commitment to family and to creating lives that delight.

2 thoughts on “First Ever Landmark Forum Held in Brasilia”