Ten In Ten: 10,000 Connected and Sustainable Villages in Ten Years 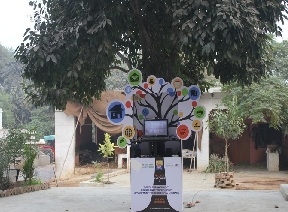 Having 10,000 Indian villages be financially sustainable is the bold ambition of one graduate of The Landmark Forum. A man named Manav is empowering the most disenfranchised of women of rural India.

Using science and technology, he and his team have created a project entitled Ten In Ten  (10,000 Villages in 10 Years), providing the training, basic computer tools and technical support needed for those women to educate their children, create sustainable businesses and connect with women in other rural villages.

The fulfillment of Manav’s dream will be to have 10,000 Indian villages financially sustainable within ten years.

In 2004 when Manav did The Landmark Forum he asked himself the questions “What do I stand for? What is my calling?” The answer was and continues to be making a big difference in the world, creating a ripple effect of empowering others to become leaders and empower others. When Manav began Landmark Education’s Team Management and Leadership Program in 2012, he found the tools to go beyond where he had been stopped as an individual and create a team with the capacity and resources to fulfill on his vision.

Manav realized that while India has become a leader in global technology, the country itself is facing an agrarian crisis, with many families trapped in the cycle of poverty, with no access to technology that can lift them out of this condition.

* Support in applying these skills to educate children and create businesses and entrepreneurships.

Manav and his team realized that it is the women who make things happen for families in poverty around the world.  They determined that if the 10 In 10 Team provides the women in the villages with access to technology, local trainings and ongoing support, the women will use those tools to create village level businesses, offering products in larger markets and using technology for gathering information in other villages to team up and create sustainability. The use of technology will transform their economic viability.

When the project got started four months ago, the first obstacle the team encountered was how to make technology friendly. Since the tree is held in high regard throughout India and is an object everyone relates to, the team built an artificial tree kiosk in the center of the first village and installed the monitor within the trunk.

The first village is already up and running, using Skype as the first access tool. By the end of 2012, a curriculum will be available in a 20-hour course for the women on how to use the Internet. Already the computer is being used by the villagers to connect with banks and other villages.

Manav and his team have begun raising funds and gathering sponsorship. They have enlisted two major global corporations so far who have signed onto the project. The next phase is to expand the technology, offer training camps, recruit trainers, and complete the curriculum for that training. The short-term goal is to have one hundred villages connected within nine months, seeking donors who can sponsor those individual villages. The team is now putting together proposals for the government, individual donors and large corporations as well to raise one million dollars for the first 100 villages.

Manav envisions his team’s project eventually becoming a nonprofit organization, affecting a million people who in turn will impact a billion others. With Ten In Ten already up and running in one village in less than four months, the next question Manav is considering is how to move the project beyond ‘us’, so that it is sustainable and eventually brings financial sustainability well beyond India to the youth of Palestine, to poorer countries in Africa and around the world until it becomes an unstoppable force woven into the fabric of all cultures, taking on a life of its own.

10 thoughts on “Ten In Ten: 10,000 Connected and Sustainable Villages in Ten Years”