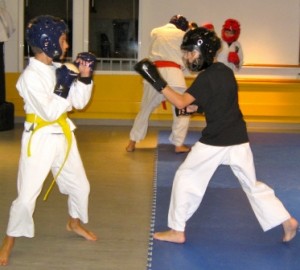 CC Walters' project in Landmark Education's SELP course is to fund scholarships for kids to be able to attend martial arts classes. A new project created in Landmark Education’s Self-Expression and Leadership Program seeks to give year-long scholarships to martial arts classes for underprivileged youth, as well as offer self-defense clinics for the general public – the tuition for attending the clinics goes directly to funding the scholarships.

CC Walters of Gig Harbor, Washington, created the project, which was the subject of an extensive feature in Gig Harbor Life. Here are excerpts from the article.

By Marsha Hart and Scott Turner

When people enjoy an activity, they usually want to share the joy with others. CC Walters, a Gig Harbor resident, recently started a project for a self-expression and leadership course that will help her share the joy of martial arts.

Landmark Education helps people realize their potential as a human being, she said.

Her project will help area youth realize their dreams of joining a martial arts class.

“I’m doing a project for my community,” she said. “The project is creating a scholarship fund specifically for Zen Martial Arts to start with.”

She hopes to help three underprivileged youth get martial arts instruction for a year at Zen Martial Arts. She and her husband, along with their three sons, currently attend martial arts classes in the Gateway Fitness building.

She wants to give other youth the opportunity for the same experience.

“It’s called Highroad youth Scholarships,” Walters said. “I spoke to my martial arts school, and the three masters, and proposed to them that we put on some self-defense events for the community.”

Clement Hong, the black belt instructor at the school, said it was a brilliant idea.

“Ultimately in these public classes, people will learn awareness We will teach them simple self-defense techniques, movement, balance and things to defend themselves in a none-safe situation,” Hong said.

The events will teach self-defense techniques at four separate clinics in November and each one can hold up to 30 people. The base at Zen Martial Arts is Tae-Kwon-Do. Dr. Phil Yip started the school 35 years ago and is a fifth-degree black belt in Tae Kwon-Do and has extensive training it Goju-Ryu Karate, Horei-Ryu Karate and Judo. Hong, the black belt instructor, has been with Zen since 2001 and has prior training in Shotokan Karate.

“There’s going to be some really good attention given to each person in terms of learning techniques,” she said. “They’re going to totally come away with something.”

Each clinic will be $20 per person, and the money will all go for the scholarships.

“This is for kids that just flat out don’t have the money,” Walters said. “My idea for it is I don’t want them to have to write an essay or jump through hoops. There will be an application on the website.”

The overall goal of creating the scholarship fund is to eventually have Highroad Youth Scholarships fund other activities. Walters hopes to get a group of people together who know how to make it all happen for the greater community.

“It might be voice lessons, art lessons, fencing, gymnastics or areas sometimes where it’s a little bit harder to find money,” she said. “Things where kids can really express themselves, that they just flat our don’t have the money for.”