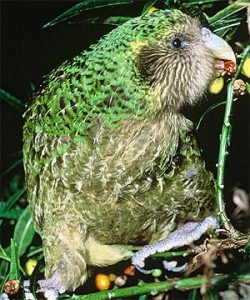 Scott Woolf raised awareness about the endangered Kakapo bird in Auckland Kindergarten classes as his project in Landmark's Self-Expression and Leadership Program. A project to raise awareness of the critically endangered Kakapo bird of New Zealand, the world’s largest species of parrot, has come to hundreds of kindergarten classes in Auckland, due to the efforts of Scott Woolf through his project created in Landmark Education’s Self-Expression and Leadership Program. With no previous ties to any organizations, Woolf contacted both the Department of Conservation and the Auckland Kindergarten Association and pioneered the creation a program that the Kindergarten Association then implemented for thousands of students.

The result was a month long awareness program that took place in Auckland’s kindergartens, in which students made 3D models and bird feeders, and took part in parrot dress up days. In total, about 120 schools and 8,000 students were educated about the plight of the Kakapo.

Woolf initiated the project so that the next generation could become aware of what was happening and develop a passion for protecting the world’s wildlife and its environment. Barely over a hundred of the birds are alive today – they are protected and monitored on two predator free islands.