The Green Wheels project is boldly causing bicycle commuting in the heart of India. 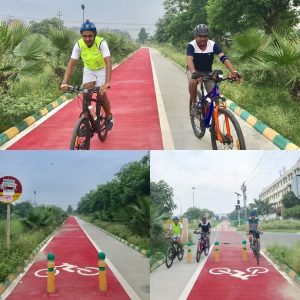 The cities are choking, road infrastructures are unable to manage the ever-growing demand and the planet is getting warmer at a pace that is unprecedented. Mr. Kirti Rawat set out to address these issues in his project ‘Green Wheels’, initiated during his Landmark Self Expression and Leadership Program in June 2017.

Cycling is close to Mr. Rawat’s heart, and whilst he was being able to work on his fitness goals with cycling at the source, something that he saw missing was any impact to the environment. Cycling is being used as an alternate means of commuting to cut down emission levels and decongest roads in several cities across the globe but India has not moved in that direction, with the exception of a few small efforts in some cities.

The intent of ‘Green Wheels’ is to promote and leverage cycling to work as a medium for decongesting traffic and improving the air quality of cities, besides the known health benefits to commuters. Whilst the project has no geographical boundaries, the current scope of the project is focused towards the state of Uttar Pradesh, India. The team is using a two-pronged approach to achieve what they have set out for in this project.

The previous Uttar Pradesh government built cycling tracks across key UP cities of Lucknow, Bareilly, Noida and Greater Noida. However, there were design flaws with the tracks, because of which riders didn’t use them. Over a period of time, these tracks became completely unusable as a result of encroachment, digging, etc.

The BCG team has met the Noida authority CEO requesting support for this and as next step are setting up a 1,000 km round trip ride to Lucknow to meet the Chief Minister of UP. The intent of meeting the Chief Minister is to give him a perspective on, what is the environmental and traffic problems that our cities are dealing with, how cycles play such a critical role in impacting our environment, and why it is important now. Besides that, one of the requests to the CM would be to revive, restructure and expand the existing cycling tracks in UP and work with BCG in ensuring there is a feedback mechanism in place, to ensure this time, the tracks are practical, rider friendly and sustainable.

In the last two years since Kirti has been cycling, he came across several prominent individuals in the Delhi NCR cycling community and has enrolled them as part of this project. To name a few:

The biggest challenge that they are yet to overcome is to enroll the UP government and to get them to sponsor this project. In the absence of the engagement from the government, the team would have solved for only one of the two aspects of the project. As a result of consistent face to face and social media engagements in various NCR cycling communities, the team has been able to create awareness around the Bicycle Commuters Guild and the initiative.

The Green Wheels project has short term goals to achieve. However, the intention is to bring a change in our environment and a behavioral change in our citizens.

When asked about Landmark’s contribution, Kirti said, “Landmark’s helped me think big when it came to scoping this project. I am confident today that I can make an impact with this project at any level and scale without and geographical boundaries. The other thing that Landmark has helped me deal with is my inhibitions that in a pre-landmark world would have stopped me from taking action. But now I am unstoppable! My inhibitions still play a role but I am able to deal with them.”