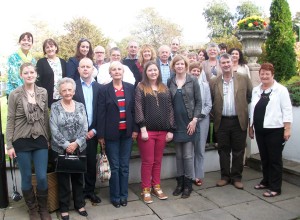 A project uniting organ donor recipients and families of donors brought peace to both groups while sharing the difference that organ donation can make in people's lives.

Imagine for a moment that you are critically ill – you are so sick from one of your internal organs failing that if you do not receive a transplant soon, you will die. Imagine also what it would be like to wait each day hoping for a donor, and knowing that in order for that to happen – for you to live – that someone elsehad to die. Perhaps you are only a teenager, or maybe you are an adult of 30 or even 60 years old.

Olivia Seery was the other side of this situation when she was notified her former husband had fallen and was on life support. She was suddenly thrust into the middle of a family debate as to whether or not to donate some of his organs for transplant. After much discussion, the decision was made to donate his usable organs, but over the time that followed, she was still unsettled with all that had happened.

In January 1998, after hearing from several friends about how amazing the work they did at Landmark was, Olivia decided to take The Landmark Forum, followed by the Advanced Course in February and the Introduction Leaders Program in March. Worried for the fate of her beloved Northern Ireland at that time, she was committed to bringing Landmark to Ireland as a way of bringing peace. Today she is the source person for Landmark in Ireland, has led the Introduction Leaders Program and is currently Ireland’s Self-Expression and Leadership Program Leader.

As each new Self-Expression and Leadership Program starts, participants make a decision as to a community project they would like to create. At the first workday of Olivia’s most recent program, an Australian doctor spoke about how he had facilitated a day of sharing for both organ donor recipients, and the families of those that had died and donated their organs. Olivia was taken by the idea and decided to do something similar as her project.  When her ex-husband had fallen and been on life support, his kidneys had been donated. The recipient had been a 60 year old man who was given the chance to live.

After the divorce of her husband, Olivia had become disconnected from his side of the family, most importantly his brother and sister. She felt that her project would be a wonderful opportunity to reconnect with them (rather than just a quick call at Christmas) if they would come to the event.

During the preparation for the event, Olivia met a wonderful woman by the name of Martina Goggin whose son had died in his early 20’s.  She started a foundation to bring donor families and recipients together. It is called “Strange Boat” – the name of her son’s favorite song.  Martina also created a beautiful commemorative garden to her son in Galway. This is where the event was held on October 5, 2013.

A lovely space was created, and on the day of the event Olivia and Martina greeted each guest as they came in. Several speakers had been planned but the intention of the event was to have a day of sharing.  Olivia was committed that people came away from the event with acknowledgement, gratitude and a greater awareness of the need for organ donation. She had worked in a hospital laboratory most of her working life so she had always been aware of the need, but it became truly real for her with her ex-husband’s situation.

The day started off by Martina speaking from the heart of her own experience in losing her only son, donating his organs, and founding Strange Boat. The next speaker was Olivia’s daughter which surprised and pleased her. All her children, as well as her brother and sister-in-law, all came to the event and even shared about their experiences. This set the tone for the rest of the afternoon. In all about 30 people attended and shared their personal stories.

There was a woman who told how her daughter had been healthy and happy and on her honeymoon when her kidneys failed.  She is presently on home kidney dialysis, but isn’t yet a candidate for transplant since she is not actually on life support. One minute her life was normal and happy and in a blink it was taken from her and she was gravely ill.

One gentleman, himself an organ recipient, spoke about what it was like to be waiting for ‘the call’ – a voice on the other end of the line saying, “I think we have an organ for you”.  He says all organ recipients remember the precise moment – the day, date, and time of that call. It is remembered each and every year with candles lit and silent prayers given out to the families of the ones who had to die for the recipients to live. He went on to say that all the love and joy that is felt at being given a second chance to live, is mirrored by the grief and sadness for those who have lost their loved ones.

Another father shared how his daughter had been so sick she had spent most of her life in and out of hospitals. When the initial call came for her transplant, there was a missed connection and it did not take place. All that hope appeared to have been for nothing, but they did not give up. She is now a grateful recipient and has her second chance at a life. People were moved by her story and applauded her courage.

Others shared what it was like to be faced with the ones they love on life support, and being torn apart between hoping for a miracle and giving permission for their organs to be harvested. These people left the event grateful for the decisions they had made to donate.

As the event came to a close, Olivia knew the day had been a great success. She had provided a safe, warm opportunity for both donor families and recipients to come face to face for a chance to share, make peace with the hard decisions they were forced to make and perhaps to even heal from the ordeals they had endured. The trials of those too sick to come to the event – those still awaiting an organ were remembered also. One woman was initially upset because she had wanted her husband to be there with her, but he was on life support awaiting ‘the call’. She subsequently left the event peaceful and glad she had come. Olivia herself realized what an honor and a privilege it had been for her ex-husband to have given his organs so someone else could live.

The next day Olivia received a call from a man asking saying he had heard of the event and was wondering how to become an organ donor.

Olivia wants people to realize how precious and precarious life can be and how it can be easily extended through organ donation. Being forced onto life support can happen at a moment’s notice to any of us, but as long as they have life, they also have hope as they await the call. She wants people to go beyond what is possible and not be squeamish about things like death, and the gift of life that can come from it through organ donation. Her hope was that at this event people would get rid of any bias against organ donation, and her vision was that attendees would come away peaceful and share the day with ten others who would then share with ten more and so on until people could finally be prepared to discuss these important decisions should the situation arise.

Another event is tentative scheduled for January 2014.

“Remember that while it is a choice to donate a loved ones organs or not, for that person sitting by the phone struggling to breath because their lungs or their heart is failing, or on life support from failing kidney – it is not a choice,” says Olivia. “It’s their only way to live.”

The website for The Strange Boat Foundation is www.organdonation.ie