The Fable of Shannon Cable 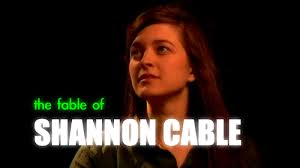 What could be more fun than a musical ghost story film? Read more about Vinnie Hogan's project from his Self-Expression and Leadership Program. Vinnie Hogan created a musical ghost story film as part of his Self-Expression and Leadership Program project. The idea for the film initially came to him when growing up in Oklahoma City in an older neighborhood. The thought of being a young person caring for an older house with visions of ghosts, combined with real world conflicts, intrigued him.

The idea had been in his head the entire four years he was in college, and even two years after graduating he was still kicking the idea around. Hogan recalls how once when he went back to his parents’ house in Oklahoma City, at about two in the morning there had been a power outage that shut out all the lights in the neighborhood. The only light was the blue light from his cell phone.

He remembered how frightening it had been to be completely surrounded by darkness, and some of the ideas from the film were born:

“What would it be like to be at my parents’ old house and looking down from the second floor seeing only this glowing blue light kind of seep into the upstairs? I started thinking about what kind of monsters or characters would create blue light and that’s where the idea for the Funky Soul Retrievers came from”.

Shooting with almost no budget (the film’s entire budge was less than $5000), it made sense for Horgan to write about something he was familiar with. – the house in the film is actually his parents’ house.

Hogan discovered Landmark through his first producer out of college. His Mom had met Richard Ford, a composer, producer and Landmark Leader. Richard had told her he was raising money to shoot a film and that was set in Austin, Texas. Having a girlfriend in Austin, after college Vinnie knew he wanted to spend some time there anyways, so he called Ford to tell him he was hungry to get involved with a film production. Richard said he needed the help, and they became friends. When asked how he went about raising the money for his films, Richard said he had gotten a lot of great coaching from a company called Landmark. Hogan ended up taking The Landmark Forum shortly after that in 2009.

As he was finishing his Advanced Course, he declared he was going on to take the Self-Expression Leadership Program and that he was going to create a ghost comedy musical. He declared he was going to film it for very little money and do it in Oklahoma at his parents’ house. He had no idea how it was going to take place, but it happened. In fact, the entire filming and editing of the movie actually took place before starting his Self-Expression Leadership Course, so once in class, he created that he would screen the film in Austin, Oklahoma City, Los Angeles, and New York – those screenings were actually his project. The film recently premiered at the Austin Film Festival in October, and on November 16th it will premier in Oklahoma. Los Angeles and New York dates are scheduled for early 2014.

When asked what his motivation or contribution for his film was, Hogan had three answers. The first was that he wanted to make a film that was like a big bowl of Halloween Candy. He wanted a conglomeration of all these things that are fun – you normally wouldn’t see together all in the same bowl – but that the bowl is so big somehow it works with all the wildly different flavors.

Second, he did not want to do anything that was big budget or that had a lot of external influence. He really wanted it to be something within his complete grasp. He says he also realized very few horror movies revealed the story through song. But at the end of the day, the reason he really wanted to make this film, was that he believes sometimes doing the right thing is not the same as doing the appropriate thing. He’d heard stories of the film industry where you can’t make this genre or that genre, or you can’t make this kind of film or that kind of film, or this or that is appropriate. He says he simply ignored that whole train of thought and did it anyways. In fact, some of the characters in his film don’t do what is appropriate; they do what they think is right.

Vinnie wants people to walk out of the theater after seeing the film thinking ‘man, that was a lot of fun’.  He wants them to be energized, excited and lit up.  When his film is compared to others like “The Rocky Horror Picture Show” he says he has often told people he “hopes they someday can go watch it at the Alamo Bathhouse Theater with people singing along and throwing food at the screen and stuff.”

Vinnie wanted to let people know that the Landmark expression “Your course starts when you register” was very present for him and continued through his Self-Expression Leadership classes.  “When you throw your hat over the wall,” Vinnie says, “–and you have no idea how you are going to climb that wall – you will be surprised at what amazing results can occur.”

More information and can be found at “The Fable of Shannon Cable” Facebook page and this article from the Oklahoma Gazette.