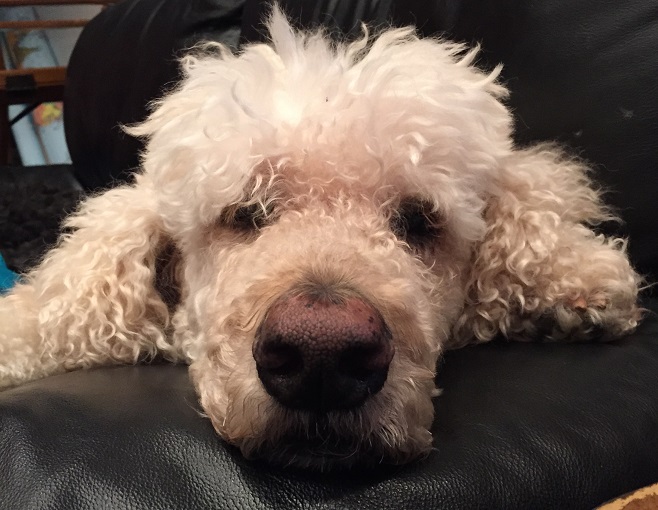 A woman who has brought bedside dog visits to thousands in hospitals had her project begin with an extraordinary event. At the age of 35, Laura Botfeld, a Landmark graduate, was critically ill and in the hospital. While there, she remembered seeing the tail of a golden retriever going by her room. She says she didn’t even know if she had actually seen it or not, but that it gave her so much comfort, being a dog lover, that she promised herself if she ever get out of the hospital she would do something to give that comfort to others.

Years later she was in Landmark’s Effectiveness Seminar, in which participants were asked to create a project in an area of life that is important to them. When dreaming up what her project would be about, she laughed and said “It was either going to be about cleaning my garage or something to do with dogs”, and then remembered her promise from years before. She created the possibility of making a difference and called her project “Dogs that Heal”.

Although she owned a standard poodle at that time, she realized that, at 13, it was probably too old and not the right temperament to be doing the kind of work she wanted, so her project began with Laura investing herself in learning all about dogs and their temperaments. She volunteered with dog adoption centers and initially adopted a rescue standard poodle, training her and certifying her as a therapy dog, which she brought to elementary schools.

She knew she wanted another standard poodle, but it would take a very special temperament to be just the kind of therapy dog she was seeking. Laura’s online research brought her to a ranch for poodles in Alabama. The owner was committed to breeding standard poodles with service dog temperaments rather than for show. Looking at the website, Laura said she was so curious because this seemed to be the Rolls Royce of how to raise dogs. She decided to travel all the way across the country to Alabama to see for herself.

Upon her arrival, what impressed her the most was that the dogs were not the ‘uppity and aloof’ poodles she had expected. These poodles were laid back and completely comfortable around the horses, pigs and goats at her farm. There were kids who worked there and the dogs were not treated like pampered show animals, but rather like any other loved working dog that ran around and played. This was the kind of temperament Laura needed and wanted for her service dog project. Her poodle had to be really special not only for the project but as her next companion.

It was here she met Apollo. He was a large off white apricot colored standard poodle who looked much more like a childs giant stuffed animal than a real dog, but he and Laura came home to start their journey together. As Laura’s project came to life, she initially stayed away from hospitals, knowing that was a trigger for her anxiety (left over from her hospital stay), so she and Apollo went to schools to read with children. She became so popular that one of the parents said she had to go see a very large local hospital medical school program. On their first visit, Laura says she was a nervous wreck, but even with all the hospital noise and stimulation, screaming and crying people, things being dropped, and strange things like wheel chairs, Apollo was right at home. The kids, staff and adults loved them, so they were asked to stay on.

All of these were her milestones to meet during the course of her Effectiveness seminar and it all went so well, that she completed more and more mini projects for her “Dogs that Heal” project. Laura says it was magical, but the real miracle was yet to come.

Because of her fear of hospitals, even after agreeing to go there, she would only go onto the ‘easier’ floors like the rehabilitation wards, but never anywhere that involved small children.

Laura and Apollo visited the medical center for about two years, and during their visits she had actually been afraid to walk by these sensitive areas, yet on this magical day, she and Apollo happened to be walking by the pediatric Intensive Care Unit when a parent came running out towards her, saying “Is this your dog? Is he a therapy dog? Please bring him to visit my daughter! She is in the PICU (Pediatric Intensive Care Unit).”

Laura was instantly terrified, thinking this was the thing she had been most afraid of, but she could not turn down this obviously desperate parent. After the necessary approvals from the hospital administration, they went into the little girls room. In the bed was a beautiful blue eyed child propped up on pillows with her eyes wide open, but completely blank.

Normally, Apollo would be led up to the patient and they would pet him. Sometimes he might even jump onto the foot of the bed, but on this day, on his own, he seemed to know what he needed to do and jumped up onto the bed, stretching out next to the girl and putting his face nose to nose with her, staring into her blank eyes. Laura says he just stayed there. She had no idea what he was doing. In fact, since therapy dogs are not allowed to lick the patients faces, she was worried he might.

Eventually Apollo got off the bed. Laura remembers thinking how odd it was that the child’s eyes were wide open, but the dad was talking to her as if she was asleep. The child’s mother was praying continuously, and there was an air in the room of sadness and desperation. At this point Laura had no idea what the problem was other than that the parents kept saying “Helen, there’s a dog here–Apollo is here to see you.”

Bewildered and a bit unnerved, Laura left with Apollo, promising to return when the child was more awake. Laura had no way of knowing she had been in a profound coma for months.

Sitting in her car after they left, Laura got a call  from the hospital director. She had been volunteering for two years and he had never before called her, so a feeling of dread came over her. She thought ‘What cord did I step on, what catheter did we knock out?’ She was so nervous she almost didn’t answer the call. When she did, the director asked her if she Had been visiting a girl at the PICU? Laura said yes tentatively, and he said “do you know what happened?” Laura shyly answered “No” and the director screamed “She woke up! She was in a coma!”

Laura said she’d had no idea, and the director continued: “That girl had been moved from another hospital to ours after not waking up! She’s been with us at least 10 days and Our doctors had already told the parents that even if she woke up, she would most likely be brain damaged, but the reality was she might never come out of the coma at all.”

The director went on to tell her that within minutes of their departure, the child woke up laughing, and that her first words were “Where’s Apollo?” Completely normal and with no lasting side effects, the girl was released to go home the next day. She had been lost within that coma and it was Apollo making her laugh that had helped her to locate just how to come back to life. She said she had no memories of being in the coma at all with the exception of the funny dog who made her laugh.

Today, years later, Laura has 30 teams of dogs and people with her “Dogs that Heal” project. In her 9 years with Apollo, they have done over 1,000 bed visits, and have been written up in several magazines and medical journals. She and her family along with Apollo and two other standard poodles live in Santa Monica, Ca. and all know that “Miracles Happen”.