Broadway to Bombay Brings Flagging Workshops and Events to India

A project created in the Self-Expression and Leadership Program is bringing freedom and flagging to Mumbai. 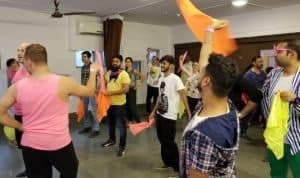 Broadway to Bombay began as a conversation in 2014 between project creator, Mykel, and his friends Prince Manvendra and Duke Deandre. Mykel is a master teacher in flagging dance and runs EecProductions.

He wanted to work on this project to help free people from their minds, especially those who do not feel accepted in the society. On the other hand the couple, Prince Manvendra and Duke Deandre have been a strong example and support for the LGBTQ community in India as well as abroad.

As activists for LGBTQ rights both in India and New York City, the three thought there needed to be a way to create a project that would impact India. Given that Prince Manvendra is well known and passionate about human rights as the co-founder of Lakshya Trust, the first organization in Gujarat, India, to work on HIV prevention amongst MSM (men having sex with men) and transgender populations; Mykel jumped at the chance to work with him as the leader and advisor.

Soon after, the Broadway to Bombay participants increased along with the support and responses of many other people. Many of the initial contributors of the project are Landmark graduates who are committed to making a difference for others.

Hatred and misunderstanding of people as a community inspired the team to bring out their best strengths and create Broadway to Bombay.  The history of the flagging dance art form the U.S. was used as a tool to unleash what cannot be verbalized; this is what impressed the Prince and the Duke to lead the project and introduce it to the right organizers for Mumbai Pride. The very fact that they saw LGBTQ activism in India just starting to blossom was another inspiring force. 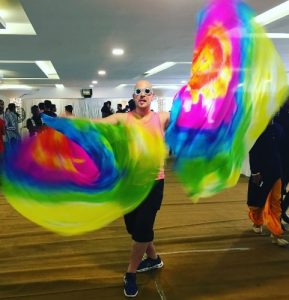 Broadway to Bombay, the Project is committed to unleashing Love and Courage through the flagging dance art form beginning with the South Asian LGBTQ Community in the U.S. and India.  This project embodies love of human beings and the freedom they all deserve – to be free from any confines encountered in the world. The team is focused on the south Asian LGBTQ Community in India and is hopeful they will expand their reach into other parts of the world. They have it established as a two-part workshop/event and were successful in fully realizing the possibility of the project this past January in Mumbai, India.

The team’s flagging workshop is a new variation of the NYC based “Flow and Flair”. Participants did not need any dance experience and were guided through a series of movements to express emotions of all kinds using the flag freeing the mind and body. Difficult emotions were shed and expressed; Love and courage emerged, creating freedom. Finally, the workshop leader guided the group through a unique flag dance creation (not one dance created is ever the same) to perform for the community event.

The event which followed was a commitment to celebrate what got unleashed in the workshop. Workshop participants had an opportunity to invite their communities to view their unique performance and create an experience that enticed and enlightened guests, cultivating community and connections to last a lifetime. In Mumbai they were successful in building the dance for participants to meet on the pride march to sing out loud: “Lalalalala…We are Here, Have no Fear!!”

The beginning of their mission as the project was realized along with a trip to India, workshops, spreading the word and creating partnerships; these are some of their major accomplishments. The team successfully conducted the Broadway to Bombay Workshop for GulabiMela kicking off the pride week. They were able to perform and expose the flagging dance art form for more than 500 attendees and got to experience the Pride March which allowed them to march with over 10,000 people on the streets of Mumbai where upon they were interviewed with a slew of press which landed in several papers and national television.

What they see in the future is collaborating and forming a larger community in North America to support our brothers and sisters in India and the rest of the world. As a result, they are in the planning stages to build a south Asian LGBT Alliance (Canada, NYC, San Francisco and Los Angeles) so that they reconnect a larger support system with the South Asian Alliance in India that they created with Broadway to Bombay. They envision this alliance to further unleash love and courage between both countries and expand to other countries. The team already has the promise of support from the SWISH Ally Fund, and now is in conversations with team members from Sales Force and JP Morgan Chase to build corporate support and finance for this next journey.

On July 28th, 2018 they will host a Broadway to Bombay New York City community building event, with the South Asian Community and their families and friends. The goal is to build a team of Broadway to Bombay ‘badasses’, so that they return at the same time next year and tour to other cities in India, delivering the workshop and event. The team has the blessings from Prince Manvendra and Duke Deandre to then end the tour at their Palace in Rajpipla that now is an LGBTQ Center so that they can further help them finish the work needed to be fully operational.

“Landmark Worldwide has played an instrumental part in the creation of Broadway to Bombay,” says Mikel. Without the structure and rigor of the Self-Expression and Leadership Program, he continues, he would not have been able to enroll two respected leaders in India.

“Over 85% of our donors are straight allies and because of the structure of program, a community of 20 people helped get the project started. The very nature and design of the Self-Expression and Leadership Program is why Broadway to Bombay is at this next level.”