Stars in the Eyes Brings Fine Food to the Underprivileged

Collaborating with an NGO and local restaurants, Sheenu Sheth created a unique event. 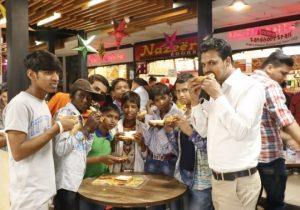 Sheenu Sheth created a project called ‘Stars In The Eyes’ during her Self-Expression and Leadership Program in December 2017, with the intention of feeding underprivileged kids. She came across a few children peeping through a glass window, craving food outside a fancy restaurant they couldn’t afford. She then realized how busy we all are making money but we seldom decide to share this happiness with the poor.

After reaching out to a bunch of food chains many opened doors to shelter homes encouraging this campaign of joy. The food chains and restaurants were her target community with the thought that ‘who can better understand the joy and comfort food can bring to the poorest in the society’. As a team, these restaurants shared empathy towards the kids by creating a successful event.

Many challenges including the event date, media enrollments and involvement of the NGOs, came up. Sheenu collaborated with a few food outlets, and the NGO called Jazbaa to register the event. 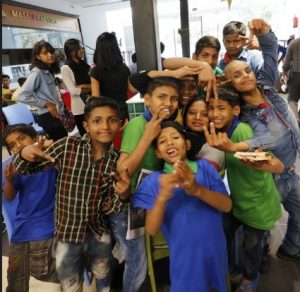 Finally the food event happened at the food court 6, Tis Hazari, Delhi on the 25th of February 2018; with 90 kids and the staff enjoying the food festival, which was organized by many outlets such as Moti Mahal, Dominos, Okay Doky, Zaheer, Freshly and Gianis. They created a menu for ‘Stars in the Eyes’ which incorporated one to two dishes from each outlet. The NGO Jazbaa organized dance performances and interactive sessions for the kids adding dimensions of entertainment while making it more memorable for the kids. The media coverage in print with Dainik Jagran and UNI added value to the program.

Another important accomplishment for Sheenu was that this project was an eye opener, proving that anything can be scaled up according to the goals we set. With clarity, integrity and confidence in action the possibilities are infinite.

Sheenu Sheth hopes to keep ‘Stars in the Eyes’ alive with the help of many leaders, planning many more moments of happiness for the underprivileged in the society.

According to Sheenu, “The contribution of Landmark in this project was through the distinctions and the performance triangle that has been huge proving how actions when planned, declared, and executed, can make anyone achieve anything.”