‘Before I Die’ Initiative Goes Global 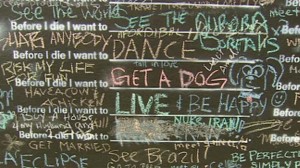 One woman who took part in the Landmark Self-Expression and Leadership Program is part of a global phenomena - 'Before I Die' blackboards cataloging human desires. As her project in Landmark Education’s Self-Expression and Leadership Program, Dana Ramler created a ‘Before I Die’ blackboard where people can write what they intend to experience or accomplish while they are still alive. Located in Vancouver, near Keefer Street, the giant board contains the phrase ‘Before I die I want to’ written multiple times with blank spaces to follow.

Ramler says she was unsure whether the idea would be well-received or whether the board would be vandalized, and that she was overwhelmed by the positive response. She says that she was struck by the commonality of human desires, in all of its unique expressions.

Ramler’s efforts were inspired by the original work of New Orleans artist Candy Chang, with blackboards now springing up in Germany, Australia, England and Spain. More on the Before I Die project can be read in the Vancouver Sun and at CBC News.

3 thoughts on “‘Before I Die’ Initiative Goes Global”