Alan Lowe: Creating Commitment to an SELP Cause for Kids 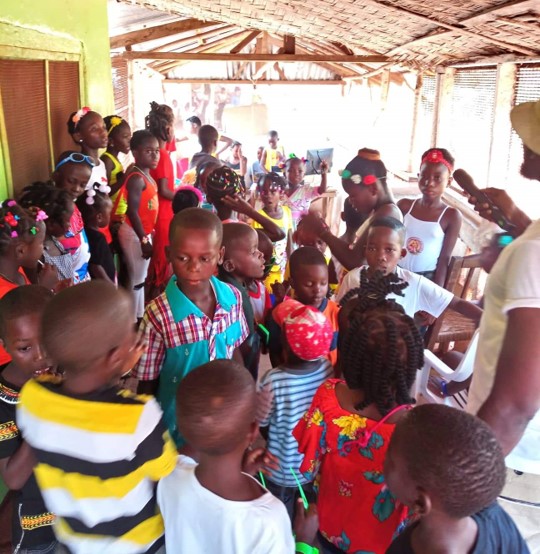 “Until one is committed, there is hesitancy, the chance to draw back. Concerning all acts of initiative (and creation), there is one elementary truth, the ignorance of which kills countless ideas and splendid plans: that the moment one definitely commits oneself, then Providence moves, too…” – William H. Murray

This is a story about commitment. It’s a story about breakdowns and breakthroughs and being your word even in the face of no agreement. That’s why it’s so worth telling.

In talking with Alan Lowe about his project and subsequent nonprofit, he explains how the connection to Liberia came about: “In America we have a lot of resources available in our own backyard that other countries don’t have access to. So if we don’t reach out and help where we can, who will?” Alan works with IDEFOCS founder Morris Matadi, a Liberian citizen and former child soldier who was only eight years old when civil war broke out in Liberia:

“His personal story is that his dad had been a soldier in the army and retired prior to their civil war. Their family was going through a checkpoint and through some miracle, Morris got separated from his family. When his family made it to the checkpoint, they found out that his dad had previously been in the army, and they killed all of his family. So that was his story, and he went through being a child soldier.

“The soldiers would go around and kill the family members and take these kids and make them child soldiers and get them addicted to drugs so that they would do what the rebel army and commanders wanted them to do. He lived through that and made it out of it. And his goal now is to help the 60,000+ kids who got caught up in that.”

Morris’ story left Alan touch, moved, and inspired to connect his nonprofit with Morris’ organization in Liberia. “I knew I wanted to start a 501c3 for kids, and that’s how I got the name ‘Helping Hugs for Children,’ but I didn’t meet [Morris] until last year. So the nonprofit has been around legally, but we didn’t start doing anything with it until last year. And we put on a Christmas party for 400 kids last year, which was pretty cool.”

Alan is clear that working to help disadvantaged children like the former child soldiers in Liberia is what he wants to do with his life. “The more and more people I hang around with that give back, the more and more you become involved in that mentality …For me, if I could do anything fulltime, I would do my nonprofit just because I really, really like helping other people. And that will be a reality.”

Creating a possibility…and facing the pitfalls

Helping Hugs for Children was created through Alan’s participation in Landmark’s Self-Expression and Leadership Program in his hometown of Houston, TX: “The project that I did, [laughs] I thought it was going to be pretty easy. I wanted to start a 501c3 to help kids out. I didn’t realize that when you get involved in the government, it’s not always easy!”

After repeatedly hearing about The Landmark Forum from an acquaintance, Alan eventually went to an introduction. “I could see how it could improve my business, so I decided to enroll in the class. And I actually then went through all the classes. And instead of improving my business, it actually changed my life.”

Listening to Alan talk about his project, it is clear that one of his biggest shifts was in the realm of honoring his word and elevating his integrity:

Aside from Alan, Helping Hugs for Children has two main partners in the States –fellow board members Marilynn Bailey and Randy Spear. While he’s happy with what the three have accomplished so far, Alan is also aware of how much farther they want the nonprofit to go in the future. Talking about the breakdowns he’s encountered along the way, Alan says:

“I thought at the time the hardest part would be getting the legal stuff done and getting approved as a 501c3, but once all that was done, I found that a lot of people don’t have integrity the way I expected. I found that a lot of people–and I had the same issues–we have a hard time saying ‘No’ to people that need things. You end up overcommitting, and you can’t really live up to everything you said you were going to do. And I have to remind myself that I was that way at one time also.”

That doesn’t mean he’s giving up. Instead, Alan is present to what he’s up against…as well as what he’s discovering about his own abilities: “Trying to get people enrolled in what you’re trying to do is probably the hardest thing that I have found. I’m still having difficulty with it, but it is coming along more and more. I guess the more you try, the more you get better at it.”

“If you don’t ask, the answer’s always no”

“I’m continuously looking for people who would be interested in getting involved,” Alan says. “I haven’t really reached out to anybody in Landmark. [Laughs] That’s probably my own fault.”

Alan has been transforming his relationship with asking, and he is seeing results:

“Over the last several months we’ve done really well; a lot more than we’ve accomplished ever before. So that’s allowing [IDEFOCS] to create their dream into a reality, and all the kids that have been stuck over there, it’s giving them something that they can actually see where there’s possibilities existing and being created into reality.”

Alan is excited to continue growing Helping Hugs for Children. “If you look at anything that you do that’s worthwhile, it’s not easy. And one of the key things that you need to have is perseverance.” About Landmark, he adds, “Landmark was the real start of all the personal development I’ve gone through over the last 7 ½ years; apparently it had a good impression!”

More information about Helping Hugs for Children is available online.

Do you have an amazing Self-Expression and Leadership Program project you’d like to share with the greater graduate community? We would love to hear it!

Wondering what makes for a great story? Check out our FAQs: Submitting Landmark Projects and Transformational Story Ideas to Landmark Forum News.

“…All sorts of things occur to help one that would never otherwise have occurred. A whole stream of events issues from the decision, raising in one’s favor all manner of unforeseen incidents and meetings and material assistance, which no man could have dreamed would have come his way. Whatever you can do, or dream you can do, begin it. Boldness has genius, power, and magic in it. Begin it now.” – William H. Murray

1 thought on “Alan Lowe: Creating Commitment to an SELP Cause for Kids”