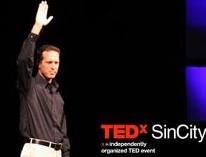 Bruze Muzik's TED talk discusses living as the only white person in one of South Africa's poorest neighborhoods, a move inspired by his participation in The Landmark Forum.

Landmark Forum graduate Bruce Muzik recently gave a TED talk – a talk at the renown Technology Entertainment and Design global conferences, where speakers strive to present world-changing ideas. Muzik’s talk focused on how as a supposedly liberal, white South African, he realized he was a racist who was scared of black people, and out of that realization moved to one of the poorest, all-black neighborhoods in South Africa, and lived for six months as the only white person in the neighborhood.

Additionally, Muzik’s talk focuses on being honest about one’s darkest secrets in life, and the aliveness that returns to people when they do that.

In this article from iol news, Muzik tells how The Landmark Forum was the inspiration for his six-month move. Muzik’s TED Talk is shown below.