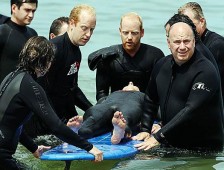 While a coach in Landmark Education’s Self-Expression and Leadership Program, Dave Benjamin created a project titled ‘Third Coast Ocean Force’ to prevent drownings in America’s great lakes region. Here is his account of the project.

With the mantra, “without action there are no results”, I realized that lives are at stake and created the community project, “Third Coast Ocean Force”.

The title, “Third Coast Ocean Force” was created because the Great Lakes are sometimes referred to as the “Third Coast” of the United States and it can have “Ocean Force” rip currents during windy weather conditions.

The project currently has two tiers:

We have another “Surfboard Rescue Techniques Class Scheduled for Sunday, July 17, 2011 in Frankfort, MI – there are also request for this class in Michigan City, IN; Chicago, IL; Milwaukee, WI; Sheboygan, WI; and Duluth, MN.

While researching for this project, I discovered that several organizations were already in action regarding these causes, so I created partnership with The Great Lakes Surf Rescue Project and the National Weather Service.

About the National Weather Service’s “Break the Grip of the Rip!”® National Rip Current Awareness Week, June 5 – 11, 2011.
In an effort to heighten public awareness of rip currents at surf beaches, each year NOAA designates the first full week of June as national Rip Current Awareness Week, coinciding with the traditional start of the summer vacation season. Rip currents are strong narrow currents moving away from shore. The strongest rip currents can attain speeds reaching 8 feet per second; this is faster than an Olympic swimmer can sprint! On average, more people die every year from rip currents in oceans than from shark attacks. In 2010, 38 people drowned in Lake Michigan (Overall in 2010, 74 people drowned in all of the Great Lakes, quite a few of them from the ocean force rip currents.)