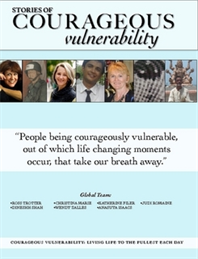 A global book highlighting the difference made by moments of courageous vulnerability began as a project created in Landmark Education's Team, Management and Leadership Program. Landmark Education’s Team, Management, and Leadership Program Team is a year long program that includes every participant creating a Game in The World, a team based project that makes a contribution to community, country or to the world.

Ross Trotter’s game was to create a book that brought together the stories of people choosing to be courageously vulnerable and how those choices brought about life-changing moments. The intended outcome of the project was that all people would have a profound sense of freedom and what was possible in living courageous lives.

The program is designed to produce high performance results using the distinction of team, and Ross’s game quickly became global, as a function of people from around the world joining the team. It began with Wendy Zalles, who was coaching TMLP in India, who connected Ross to Dineshh Shah in Mumbai. Dineshh invited Anasuya Isaacs to participate, who brought in a connection with South Africa. From there, a partnership was created across the world that produced a book with thirty-eight stories from six different countries.

The parameters for the stories in the book of courageous vulnerability included three elements:

3) The ultimate outcome of that courageous vulnerability.

In total, the game included team members and storytellers from India, Argentina, South Africa, Romania, Ireland and the United States.

The final edit has been done and the book is being condensed. Every team member shared their particular favorite nonprofit organization and the following two were selected to receive revenue from the sale of the book.

Covenant House, with headquarters in New York City (1-800-388-3888), was founded in 1972 with the simple, profound mission to help homeless kids escape the streets. Today Covenant House is the largest privately funded agency in the Americas, providing loving care and vital services to homeless, abandoned, abused, trafficked, and exploited children.

VP Youth Trust is a non profit organization founded by Dineshh Shah. VP Youth Trust contributes where and when there is a need with volunteers serving the community for any natural disaster and any other need the community may have. VP Youth trust is also associated with Indian Red Cross, Animal Welfare, Hospitals in India and so much more.

What started as one person’s vision for making a difference became perhaps the first global Game In The World using the power of team. By bringing together stories about the transformative nature of courageous vulnerability, the book illuminates the connection we have to each other around the world. The next steps include creating a second book and a blog, perhaps evolving into something even larger.

–“We stand for people being courageously vulnerable, out of which life-changing moments occur, that take our breath away!”

2 thoughts on “Stories of Courageous Vulnerability”