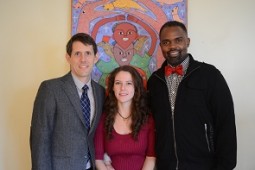 Two dedicated Landmark graduates are out to do whatever it takes to reduce maternal mortality in the developing world. Bakley Smith and Freddy Tovar are champions for women and infants in the most vulnerable places on Earth.

They are also Landmark Forum graduates who have founded MIMSI, Modification In Mother-Baby Statistics Initiative, to help impact the maternal mortality rate across the world – over 1,000 women still die every day in childbirth or from childbirth complications.

Their initiative is starting in Haiti, where one in 35 births results in the mother’s death. Their plans to decrease the mortality rate include:

–provide increased education for women on health and sexuality

Tovar’s desire to make a difference for women began as a young boy when he witnessed his mother’s abuse. He realized early that women are often poorly treated in the world. As a champion for his mother he resolved to help women any way he could. He attended Columbia University, studying at Johns Hopkins and becoming an obstetrician and gynecologist. With compassion for the obstacles women face each day, he began caring for women at the time of both their greatest creativity and vulnerability, when they bear children. He joined Doctors without Borders in Africa.

There women travel many miles over harsh terrain to receive proper care for themselves in pregnancy. He felt moved by the powerful drive among women to sacrifice for the well being of their children. He realized that women universally wish to do whatever it took to become good mothers.

At a break point in his professional life, Tovar felt a need for a change. He attended the Landmark Forum in October, 2010. From his participation in the curriculum he created a whole new possibility of service, and In the Wisdom Course he discovered what it would take to work with people to make his dreams a reality.

Bakley Smith met Tovar at Landmark Education and, inspired by his passion and capability, built a partnership with him. Bakley’s personal background gave him a natural passion for helping women. A period living in Mexico connected him with the struggles of people in the developing world. His family had its own issues with childbirth which made a mark on him from an early age. He was moved to empower women who bear children. He understands firsthand the thankless jobs of the caregivers as well. He is committed to empowering caregivers with knowledge and equipment to make a difference even in seemingly hopeless situations.

He also made a startling discovery talking with his sister. In 1940, their grandmother lost a child in childbirth while living in Aruba. Their grandfather was a petroleum engineer with Exxon in Aruba. Together Tovar and Smith intend to cause miracles.

Get involved and read more at this article in Crain’s New York Business.