Paws for a Cause has made an unexpected difference - for pets, artists, and the project creator himself. 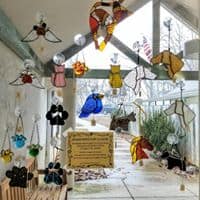 In early 2017 Tom Levien was at a crossroads in life. His kids were grown and graduating college, he’d been retired from a long career in business for about three years, and his relationship had recently ended. He was in a place where he was not feeling great and seriously looking to remedy that.

He registered and did his Landmark Forum in March 2017. He claims to not have been someone “transformed” by the forum. He started very skeptical – and is still that way – but he saw something there, so he continued. He says there was definitely some content in the forum that resonated with him. His Forum Leader was Angie Mattingly and while at times he was confronted and uncomfortable, he jokingly says “I know I did not start at the bottom with her. She was something!” 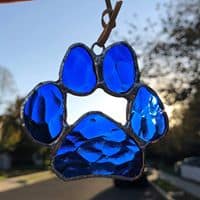 He made a friend in his Forum who talked him into registering into the Advanced Course with him. There, he says, he was more open and receptive.  By the time he did his Self-Expression and Leadership Program in the fall, he knew he wanted to make a difference somewhere.

The Self-Expression and Leadership program is the course Tom has gotten the most out of. In it, he’s using and putting together what he distinguished in the first two courses. His leader’s name is Cate Hill, and he can’t say enough great things about her.

In program he needed a project. Since he’s had a hobby of making stained glass artwork for the past year and a half, and occasionally volunteered at his local SPCA, he decided to put the two together.

He reached out to other stained glass artists through Facebook and local supply stores and enrolled them in his project. To date, more than 60 glass pieces have been donated by himself and others. They are valued at about $2000. Though the shelter has not had them long, so far 20 pieces have been sold for over $500. According to the shelter, for every $20 received, two shelter animals are fed, housed and have care for 1 day.

He says the displays of the stained glass at the shelter brighten up the place as well as make money.

When he did his project initially, he had advertised it on Facebook. He had people from all over the country tell him it was a great idea and said they were going to do it also for their local shelters. Tom instituted the program for the BCSPCA, which has two shelters near Philadelphia. Then a woman near Atlanta was inspired by his program and is now working with two shelters in the Atlanta area. There were also people in Iowa, Canada and even South Africa who have said they are going to do it. It’s his leadership – distinguished in his Self-Expression and Leadership Program – that is having this project be a reality for animals and artists all over the world. 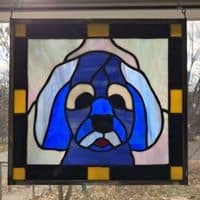 He would like this to be a charity idea that all those in the stained glass community are known for. On his project’s Facebook Page, he’s calling for others who are doing the same to list where they are doing it so people can find them.

It takes him about 30-45 minutes to make each piece he donates, although he sometimes makes and donates more extravagant ones. It’s a labor of love and Tom says most are made from the scraps left over from other projects, so the cost is minimal.

Out of his project, he says He got a real sense of satisfaction not only from helping the pets, but from the people who wanted to donate the pieces. He says they were really gratified to have an outlet like this for their talents – in a way that made a difference. He says it felt good to be helping two communities and creating more community with all of it. On a more personal level, it reminded him of his own abilities to create a project. After a long career in business, it had been a long time since he had done anything like this. It strongly affected how he saw himself.

Tom says this was not a project he was particularly excited about when he started – he simply needed a project for the class, but that doing this project had a positive impact on the recipients, on the donors who he is empowering to give, and most of all on himself. He never foresaw how doing this project would have the impact on himself it has had – it was totally unexpected.

He explains there is a woman in Michigan who was laid up with physical health issues, but when she saw his idea on Facebook, she said it was something small she could do and still make a difference. It’s who you get to be in this world that makes a difference, especially when it is unexpected.

To look further at Tom’s project or to join in with a shelter near you please visit his Facebook page at:

1 thought on “Paws for a Cause”