For three years, a project created in the Self-Expression and Leadership program has brought companionship, gifts, and entertainment to rest home residents in New Zealand. 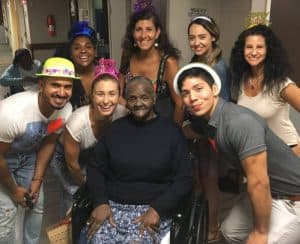 Adopt a Senior began in November 2015, created by Allena Faalavaau, during her Landmark Self-Expression and Leadership program. She was inspired to create the project after seeing the number of lonely residents at her grandfather’s rest home, especially during Christmas time.

Adopt a Senior’s aim is to remember the elderly during the holiday season. They do this by taking gifts donated by the community in rest homes and providing entertainment and companionship to seniors in the homes.

The project recipients are elderly in rest homes and dementia units in Auckland, Hamilton and Palmerston North in New Zealand. All volunteers and donors are local business owners, schools, and the growing Adopt a Senior Facebook community. Hamilton Coordinator Marci Matu and Palmerston North coordinator Nicole Chang also contributed significantly to the project.

The team was initially challenged by having to do everything – chasing gift sponsorship, organizing, coordination of volunteers, and scheduling entertainment. They did not have enough time to do everything but managed to accomplish their goals with dedication and hard work. 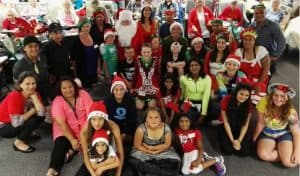 Their future goal is to register Adopt a Senior as a charity, and for it to become a national project each Christmas with coordinators in all major cities around the country.

Allena says “Without Landmark and the Self-Expression and Leadership program, ‘Adopt a senior’ would not exist. It has given me the tools and confidence to make this project a reality and reach seniors across Auckland and now Hamilton and Palmerston North through others.”

4 thoughts on “Adopt a Senior”