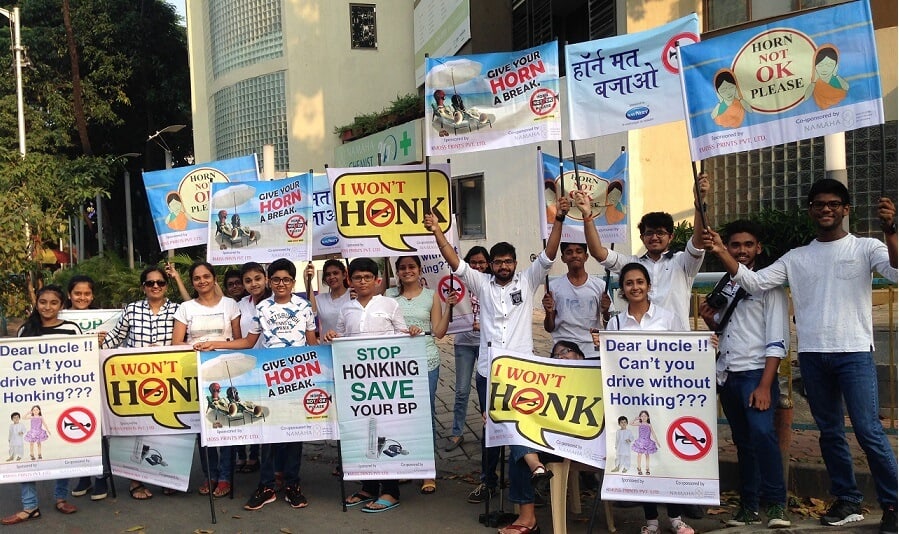 “Shhh…No Honking” is a campaign started by Ananya Maulik Shah to make the Indian metropolis of Mumbai honk free. Her question is, “Why do we honk when we know that honking won’t clear the traffic or turn the traffic lights green?”

Ananya always loved doing social work and has been a part of many such projects. But starting her own project at the age of 17 was something she never imagined. She always thought that right now wasn’t the perfect time to start something like this, and there’s a lot of time to start something huge in the future – “one day, someday.” But when she was sitting in the Landmark Self-Expression and Leadership Program classroom on Sunday back in August of 2016; she was asked to take on a project which made her realize that life is now, in this very moment. And that’s how she took up this project for making Mumbai honk free!

Whilst growing up, she never saw her dad honking in the busy streets of Mumbai because he always believed honking is not a necessity, it’s a habit, and habits can be changed. This was what inspired her to take up this project and Landmark gave the project its life by transforming a small conversation into a project. She started sharing about her project with her friends and family and it spread quickly. Everybody was upset due to the noise pollution but they just needed somebody to ignite the fire. And soon they formed a team of 200 people from all age groups (5-80), people from all walks of life, from students to businessmen. Their core team consists of some of her close friends and family members – Aneri, Dhruv, Devansh, Pratik, Ashmi, Meet, Mausam , Harshul (cousin), Aahan (brother) , Nipa (mom), Maulik (dad).

The first event took place on 25th September 2016 at five major junctions in Kandivali and Ghatkopar, India. As a part of the event, the team spread out in the streets on a Sunday evening and asked the vehicle owners to avoid honking by considering all the ill effects of honking. Also, they a made special “Shhh…No honking” poster stuck behind all the vehicles as a support towards the cause and as a message to the masses. When they first started, a few concerns regarding the police permissions and management of huge crowds came up but as things went on they received a lot of support. This also encouraged many people to participate in The Landmark Forum as they were highly inspired by the work of these young teenagers.

They have had four successful events at different places in Mumbai and have been covered by several news channels as well as received seven media mentions in some of the leading newspapers, including one in Hindustan Times. Also, before their first event they went Live on Radio city 91.1 appealing to Mumbai residents to join the cause. The numbers of stickers handed out are about 12,000. Lastly they were recognized by the Mumbai RTO, who titled them as the ‘traffic ambassodors’. Their ultimate aim is make Mumbai honk free! The population of Mumbai is 25 million, and the target is to reach out to all citizens and have the “Shhh…No Honking” stickers on more than 100,000 vehicles. They soon will be meeting authorities to discuss practical solutions to the problem such as decibel meters, fixing of decibel limit for horns, and fines.

According to Ananya Shah, “Landmark plays the most important role in this project. This is where the project was born and created. Also, at Landmark I met people who helped me connect with the world, with different media channels, and helped to make this project reach out to millions. At Landmark I learnt that age is never a barrier and life is now, there is no one day, someday. I deeply thank my parents who introduced me to this education at such young age and gave me a life which is full of wonderful moments.”