The Landmark Forum in Vietnamese – One Woman’s Story 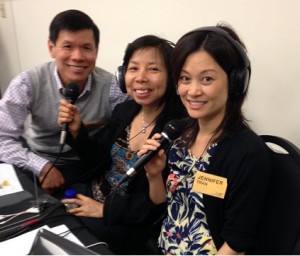 An odyssey from Vietnam to America ends in one woman spearheading the translation of The Landmark Forum into Vietnamese. Jennifer Tran was seven when the Vietnam war ended in 1975. Fear became a huge part of life for her at a very young age. Because  her father had worked during the war for the United States, he feared retaliation from the Communist Party once they took over the country, so he began planning his family’s escape by splitting it up into smaller groups. Several times he tried to send his family away by boat, but he failed each time, and several of them were even arrested.

It was 1979 when a small fishing boat carrying Jennifer, her parents and four other siblings finally escaped from Vietnam for a better life. During their time at sea they were robbed by Thai pirates, and after three days at sea, their boat landed in Malaysia where the whole family stayed in a refugee camp. There, they miraculously found two brothers who endured an even harsher trip when their boat capsized and they were only a few who were able to swim to safety. Her family stayed in the camp until 1980, when a Catholic Church in Eureka, California, sponsored them for the long trip to the United States.

The fear she had experienced early on helped her develop survival skills, but it also limited her in so many ways. Nonetheless, Jennifer has lived in Silicon Valley, California, ever since, and had a successful career in the high tech industry until 2012, when she was laid off, became depressed and had other issues at home.

When her therapist suggested she do The Landmark Forum, her life transformed completely. She now feels she has the tools to overcome her anxiety and fear, and is living a happier life doing what she really loves.

“After The Landmark Forum,” said Jennifer,  “I really got the courage to be who I am, and be able to be fully self-expressed with people. I finally understood how powerful the decisions we make as a child make us into who we are today. I’ve learned to overcome the limits we place on ourselves, and I really think that The Landmark Forum will be able to free other Vietnamese people from their fears too, so they can achieve so much more in life.” She decided she wanted to bring the transformative education that Landmark offers to the rest of her Vietnamese community worldwide, and eventually to Vietnam itself. Last year, after taking the Advanced Course and realizing their connections to their community, she and her husband,  Triet Vo, joined a group called Landmark Forum for Vietnamese (LFVN). This group was formed over a year ago by a group of Landmark Graduates in Texas and California.

Jennifer flew to Houston and helped to translate the third Landmark Forum in March of this year. The mission for the group is “to bring transformation to Vietnamese communities all over the world, and out of playing this game, our members will get transformation in their own lives.”  The group’s goal for this year is seven Landmark Forums being translated into Vietnamese.

Her latest project is the upcoming Landmark  Forum being translated into Vietnamese in San Francisco for the first time ever, on June 6, 7, 8 and 10, 2014. Jennifer wants to invite everyone, and especially her Vietnamese community, to the event, knowing that the lives of her community and her family will be altered. She wants all of them to really see that anything–all their hopes and dreams–that they might want for themselves and their families is possible out of their participation in the work that Landmark offers.

For more information about this groundbreaking event or if you have questions, please contact Jennifer Tran at [email protected] or visit the Landmark Forum for Vietnamese page on Facebook.