A Day for Miracles 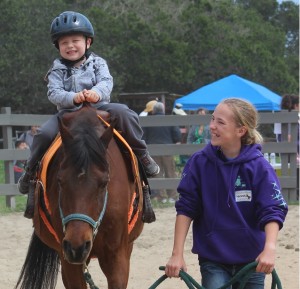 A day for autistic children to ride horses and meet animals resulted in unexpected miracles.

The following story was received from Mindy Sullivan, who gives a personal account of the project she created in the Self-Expression and Leadership Program. I needed to create a project for my Self-Expression and Leadership Program, and since I own a horse ranch where people can take lessons as well as a horse rescue operation, it was an easy decision to create a special day there, and it was something I’d always wanted to do.

When angels with autism meet horses, miracles can happen. It was advertised as ‘A Day for Miracles’, and that is exactly what it turned out to be. Programs for kids with autism were invited to come to my ranch to experience horses, dogs, cats, turkeys, chickens, and ducks, and to eat hot dogs and ice cream. On April 12, 2014, between the hours of 11 and 3, an estimated 300 people came to Dreamor Ranch in San Juan Bautista, California. The  day was free and just for the kids–and soon, the miracles showed up.

Miracle number one happened after only the first 30 minutes when a beautiful eight year old boy, who had autism as well as some other physical challenges, was smiling ear to ear while being led around on Storm, the sweet Arabian mare who was born at the ranch and who will put her head down so kids can reach her. I was watching this when his mother walked up to me, and, with tears in her eyes, explained that her son had only learned to walk a year ago and had no muscle tone for anything physical. Yet, here he was riding unassisted and loving every minute.

Miracle number two was when she walked up to me about two hours later and wrapped her arms around me.  She explained her son was beaming as they finished the ride and went to eat their hot dogs and ice cream. As they were finishing their lunch, she told him how proud of him she was. He smiled back and said ‘Mommy, can I go ride the horsey again?’ She was crying because these were the first words this eight year old had ever spoken.

Miracle three was almost at the end of the day when another woman walked up to me slowly and just stood there hugging me. Tearfully she pointed to a 14 year old boy who was running around playing with about five or six other boys. They were just doing ‘boy’ things like jumping on and off the bales of hay and it was funny to watch. She explained that this was her son. I said that he looked like a great kid and a real joy to be around, and she shook her head and said ‘You don’t understand. My son has no social skills. His play dates include him sitting in a corner and humming to himself. Yet here he is today in this wonderful space of time acting and interacting with other kids as though he were normal.’ I told her, that at this moment he WAS normal.

The final miracle was personal. In the middle of the event, a ghost from my past got out of the shuttle van and walked up to me smiling. Here, standing in front of me, was the reason I got my first horse, Stormy, at the age of 13. She and her friend were riders at a local ranch and I did everything possible to get her to take me there. That’s where I met Stormy, a former racehorse and the wrong horse for a kid like me, but I was in love. He was huge and black, and for a short time this kid from a broken home, the poor kid in school, was the proud owner of something special. I walked taller and stood straighter. It lasted only three months, but I never forgot her kindness to me or the way I felt. The experience altered my life forever.

She had seen the posting on Facebook about our event and decided to drive the two hours from her home to mine to reconnect with me. I had the honor and privilege of thanking her for her gift all those years ago. I’m clear that none of these things would have happened without my participation in Landmark’s programs.

If I had to name one thing I want people to get out of reading this story, it is that you never know what one thing you might do that might just alter the course of another person’s life for the better. Whether it is creating a day for Angels with autism to meet horses, or just doing someone a favor by indulging them in their dreams, just do it. The miracles will follow.

6 thoughts on “A Day for Miracles”