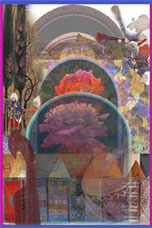 Genesis at the Crossroads - an organization founded to foster peace and understanding across cultures through art and music, created by Wendy Sternberg in her Landmark Education SELP course 10 years ago - is thriving with a wide variety of innovative programs. Genesis at the Crossroads, the organization founded by Wendy Sternberg back in 1999 in Landmark Education’s Self-Expression and Leadership Program with the idea of bridging cultural divides through artistic expression, is undertaking an 18-city musical tour marking its 10th anniversary. Titled Saffron Caravan and featuring the Genesis World Music Ensemble, the tour teams award-winning musicians from Iran, the United States, Cuba, Afghanistan and Morocco in a cross-cultural collaboration which is visiting five continents.

The repertoire of Saffron Caravan spans seven languages, and includes sacred traditions in Persian, Jewish and Arab music. The music performed includes Caribbean and Latin American rhythms and sub-Saharan blues and jazz. Over half of the musicians performing were either nominated for or won Grammy awards. Upcoming performances include a show expected in Chicago this August.

Genesis at the Crossroads is also undertaking a wide variety of other ambitious, cross-cultural projects. ‘Arm them with Instruments’ is a program which allows youths to donate musical instruments to other youths in war-torn countries, with partner organizations providing the youths music lessons as well. ‘Art of Healing’ is a multi-disciplinary workshop to be piloted in Chicago in 2011 which is designed to allow individuals to heal by externalizing their emotions through art. Most ambitiously, a Genesis International High School planned for 2014 which integrates an arts curriculum and work on conflict resolution into a high school curriculum.

To fund its cutting edge work, Genesis at the programs is raffling away seven harmonicas hand signed by Bob Dylan – the winners will be announced at a Saffron Caravan event this summer.

Since our last update on Genesis at the Crossroads last year, the organization and Sternberg have also been acknowledged on the floor of Congress by representative Mike Quigley of Illinois.

“Genesis at the Crossroads creates the unique and rare opportunity to truly work in unison with those of differing and often conflicting backgrounds,” said Quigley in a speech. “The success of the organization, now in its tenth year, is a testament to the power of the arts.”