Coming Back from a Life Altering Crash 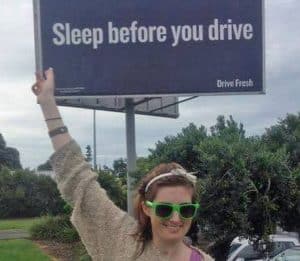 On February 6th 2011 Kelly Munford was involved in a horrific car crash, involving only herself.

It happened at 4am when she fell asleep whilst driving and hit a tree, having the tree go straight through the passenger door, to the middle of the car. This resulted in Kelly having a broken neck, broken pelvis, and worst of all, a traumatic brain injury. After spending 7 weeks in the hospital, which she doesn’t have any memory of, she woke up in her first rehabilitation.

She then spent 3 months in the Cavit A.B.I Rehabilitation Centre, which was for people who had suffered a brain injury but weren’t ready to go home, nor needed care in the hospital. Later she stayed at Laura Ferguson Trust for 10 months. Even after a year long treatment she felt handicapped and was dragged around in a wheelchair by her father from the supermarket to the vet. The rehabilitation centre had an onsite gym, 24 hour care, and more but it did not help Kelly during her struggle. Doctors said she needed to re-learn social etiquette due to her public outbursts and inappropriate behavior.

“I had no desire to help or make people feel comfortable.” Says Kelly.

She spent 10 more months in another rehab facilty, but then Kelly was suffering from depression. She was stuck in a wheelchair and it all took a toll on her. It was a very long journey and Kelly was getting impatient day-by-day. Family, friends and doctors said it will take her time to recover but she kept wondering “How much longer?”

In the longer rehab, her Dad was there having breakfast, lunch most days and dinner in her room. After investing in most appliances she cooked her food. “Times like these, you are very thankful to have such wonderful family.”

As she slowly got better, her occupational therapist thought it would be a good idea to have a mobility scooter. This was to help her get to places, so she would have energy to walk around after getting there. But in no time Kelly was involved in another crash.
“I thought it was in reverse, but it was not. I smashed straight into the window at the supermarket.”

Despite this setback, she then began to do things, that people in the real world do. She began RDA, Riding for the Disabled. This was a both a huge milestone for her and yet frustrating for her to deal with, as she went from riding her own horse to observing from a wheelchair.

After moving back home from rehab, she decided to live her normal life again. Although her life wasn’t like before she has recovered enough to do presentations of her journey which have been incredible.
Kelly says the presentations are about “making teens aware of their decisions and the consequences of their actions. It is extremely rewarding!”

Kelly also Climbed the Sydney Harbour Bridge in 2014 and they did a Special Climb for her and a friend.

These were enormous achievements considering she had to learn to walk again. In addition to her physical progress, she continued to presentations of her journey in front of hundreds of people, aiming to prevent such things from happening to others. Using the skills that she learned at The Landmark Forum, she was able to remain positive throughout such a long, difficult journey.

“I am now living the life of my dreams,” Kelly says. “I have recently relearned to ride a bike with two wheels. So now, my caregiver and I go to the beach during the week while everyone is at work. The beach is quiet. The sand is hard enough for me to ride along.
I feel so incredibly lucky.”

“After all that I have been through, Life is going great. The skills that I learned about living life with a positive attitude that I learnt from Landmark. I have created the life of my dreams after such a traumatic event in my life.”

Read more about the difference Kelly Mumford is making.