Breaking Into My Life – Bringing Mental Illness out of the Shadows 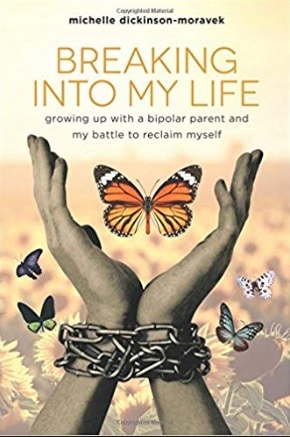 One Landmark graduate is starting a conversation about bipolar disorder and other forms of mental illness. 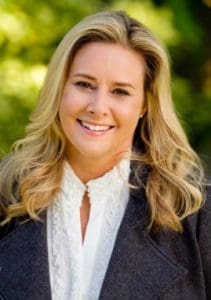 As a child, Michelle Dickinson-Moravek lived with and loved a Mom who was controlling and manipulative. Michelle’s Mother had bipolar disorder. One day Michelle had a fun and loving parent, and the next she would watch her mother slide into the pits of despair, where all she could manage was sitting and crying, but it was the in between times that were the worst.

Michelle was never allowed to be late from school, or she was locked out of her house. Never allowed to do much at all but go to school and come home. And every walk home from school was another upset stomach; embarrassment. Fear and anxiety. She never knew if her Mom would be happy to see her or sad and sometimes even cruel.

Life was so difficult that When Mom was about to go into her depressions, Michelle actually looked forward to it.  She saw a tiny ray of hope that “this time she will finally get off my back”. At the same time, Michelle felt horribly guilty anticipating her mother’s mood swings and feeling that way.

As is the case with many bipolar people, Michelle’s mother would take medication to even out her mood swings only to feel better, decide she no longer needed it, and stop taking it. The awful side effects of the medications from back then were a huge deterrent to a patient continuing the regime.

Michelle’s mother passed away about 12 years ago, but self-esteem and confidence continued to always be a struggle for Michelle.

In January 2013, Michelle participated in The Landmark Forum, and the Introduction Leaders Program afterwards. Out of what she discovered and distinguished, she created a way to bring this conversation to light in a loving and safe way, so there is no fear in talking about it. She created an opening that was not going to happen anyways without having done The Landmark Forum. Michelle has started a conversation which is causing people to open up and reflect on a subject they never would have been comfortable enough to talk about. 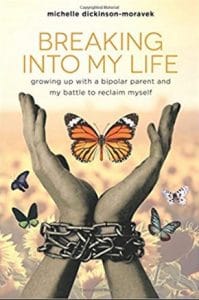 Being an employee of Johnson & Johnson, Michelle got the opportunity to first share her story on the TEDx Johnson & Johnson stage in 2014. As she stood there and described what it was like to love someone with bipolar disorder, it was the outpouring of love coming back to her that got her connected to what was possible in telling her story and how people might be helped by it. She always wanted to make a difference, and the company she works for has given her the opportunity to do that. In the month of May (which is World Mental Health Awareness Month) she had the opportunity to speak at 3 different venues to other co workers. One woman told her she has suffered from bipolar disorder her whole life, but it wasn’t until she read her book that she even considered the impact it might have on her own family.

Today she is contacting other schools also to start the conversation about mental health. She has also written a book about what it was like growing up with a seriously afflicted bipolar Mother and Michelle’s battle to reclaim herself and her life. Titled ”Breaking into my Life”, the book describes her life’s journey, and can be found here on Amazon.

Even more powerful and exciting, Michelle has been given the opportunity to talk to young people, and that is where her heart is. A friend’s two daughters were recovering from the shock of a classmate’s suicide. The friend had killed herself due to untreated depression. The high school, at the time, did not do much to address the teen’s death. In fact, they did not want to talk about it for fear of either glorifying it or of repeat suicides. Doing nothing to help, these girls were still suffering. Michelle spoke to them and gave them a copy of her book requesting they take it to the school principal. Within a week, she had an opportunity to talk to all 700 students. She gave them tools and resources to cope and heal. She told the students they needed to keep talking about it to counselors or a help line, and stressed that was the way to deal with the experienced trauma they might be feeling. She also stressed they should “have each other’s backs and support each other”.

Soon after, one of the school’s counselors called Michelle. She told her she had a student come to her saying there was another student in one of her classes that had been sitting at the back of the room crying and explained she was worried about him. The counselor may not have ever known anything was amiss without Michelle having been there, and more crises may have ensued.

Who is Michelle? She says she believes who she is, is love for those around her. Before she walked into her Landmark Forum, Michelle says she was so much a victim of her own life. Luckily, her friend suggested she do the course and, according to Michelle, it was her first chance to step away from being a victim and begin to heal. She says she got to get a glimpse of what it must have been like in her mother’s eyes. Before her Forum, Michelle was so much at the effect of everything her mother did, she said her mother had screwed her up and so she had thought she was permanently screwed up.  She wallowed in “being screwed up” a long long time. However, in the Forum she got that she could actually take her power back and be happy.

Michelle says that life and The Landmark Forum is all about what is possible when you can get complete about your past.  If she had not done that, she could never have been creating a future of making an impact that is blowing her mind. She says whatever there is to do to clean up and get complete with your past is going to lead you to a pathway you cant even wrap your head around yet. If she has it her way, she wants to get into as many schools and youth programs as possible to talk about this in a way that has the concept of mental illness shift in a way they can relate to it. She feels if we can empower our high school kids, they will be in a much more safe, sound place when they go to college and they will be conditioned to deal with whatever comes their way.