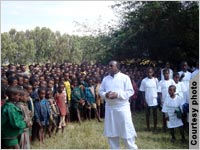 The efforts of Gashaw Tahir to reforest devastated parts of his native Ethiopia have attracted the attention of the U.S. State Department, which has written a feature about Tahir and his work. Tahir has credited the Landmark Forum with giving him the ideas and tools to make a difference, and his reforestation work led him to be recognized by the United Nations, which honored him with a Green Award for private sector work.

The State Department story tells of how Tahir returned to Ethiopia to discover a drastically altered landscape – dense forest has turned into a barren, rocky wasteland, and of the 10-15 rivers that run near where he spent his childhood, all but one or two have dried up. Local residents, 80% of whom Tahir says are farmers, have been unable to grow enough food to even feed themselves. Malaria has been spreading and is now a leading cause of death.

Tahir’s solution was to reforest the mountainsides. He began with a two-acre plot, hiring 450 local Christian and Muslim youth to plant seedlings, which not only restored trees, but also increased employment and religious tolerance.

The Greenland Foundation, the organization he formed, has now planted over a million trees, and the attention gathered has led to similar efforts springing up elsewhere in Ethiopia. He has now been awarded an additional 4,450 hectares of land (about 20 square miles), and he is in the process of expanding his efforts by hiring 1,000 young people to plant fruit trees, which in addition to stopping erosion will supply a sustainable source of food.