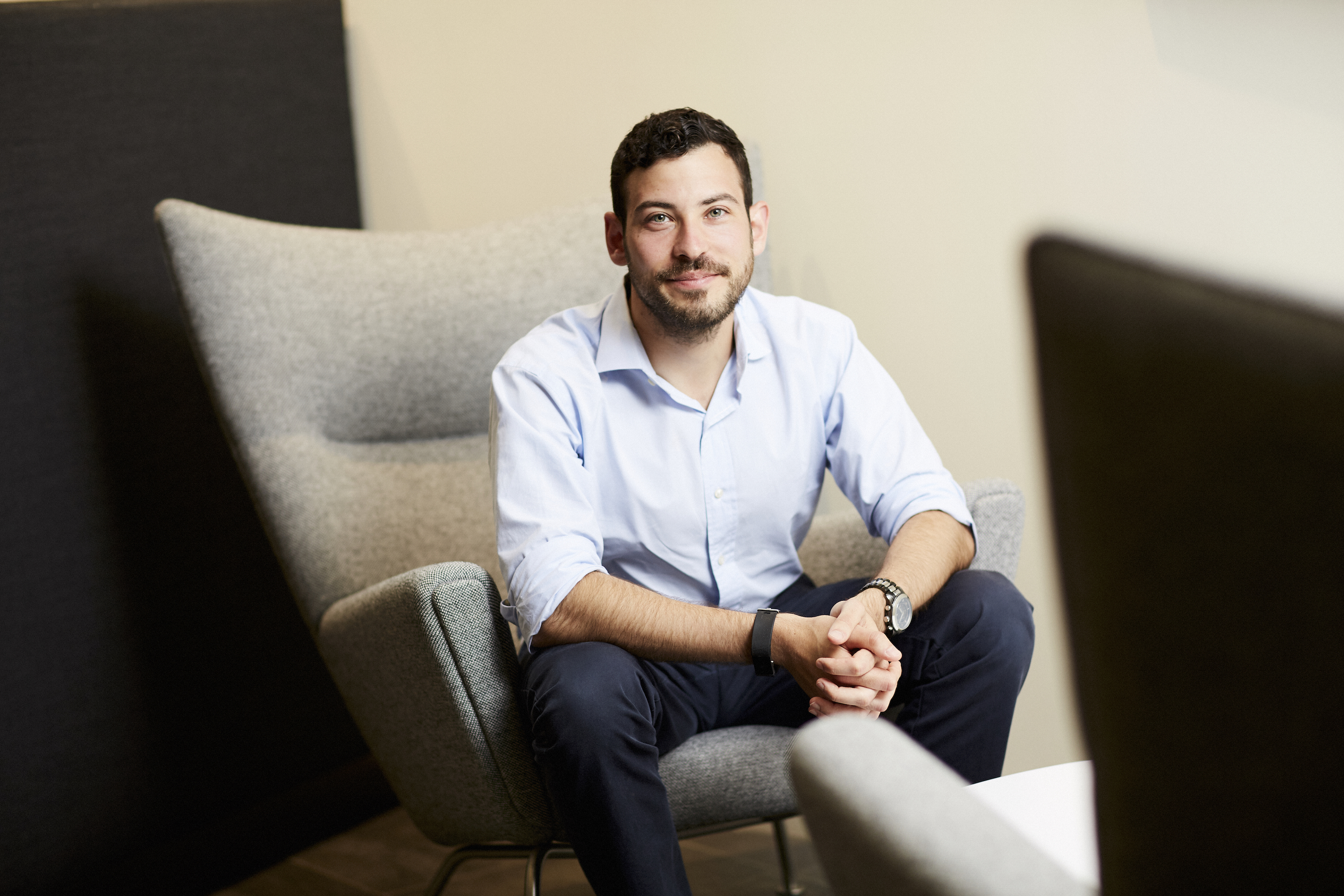 That’s Zach Schleien, Landmark graduate and co-founder of 18percent, a free, peer-to-peer online support community dedicated to mental health. After seeing the sometimes-deadly side effects of mental illness in 2017, Zach has taken on both fundraising for area mental health initiatives and championing his own, the online community 18percent.

“I had a close family friend by the name of Louis,” Zach shares, “and I grew up with him; I grew up with his brothers. And Louis, at the age of 19, was diagnosed with bipolar and schizoaffective disorder.” Louis was hospitalized multiple times, struggling with both the disease itself as well the effects of his prescribed medications. He survived the disease for three years before passing away in 2017.

Facing the death of his friend, Zach looked for a way he could help:

“In his honor, I started–well, I first raised money. I raised $40,000 in his honor through crowd funding and donated that money to NAMI [the National Alliance on Mental Illness] to help other teens who have mental health issues and to help their families to support these teens.

“I ran two campaigns total, and the second campaign was really special because it was for a low-income area. It is really tough if you’re low-income and someone in your family has mental health issues. [NAMI El Dorado] was the closest NAMI to where Louis’ parents live in California…We raised another $30,000 in that campaign.”

The fundraising campaigns Zach ran not only offered help to future individuals facing mental health challenges, they also gave an outlet for Louis’ family to help others going through challenging situations: “Louis’ dad Fred, when I started the second campaign, he started volunteering for that NAMI…It’s special to see Fred healing. He actually came on the board of NAMI, so it’s cool that he was also able to contribute and help with his own healing.”

While Zach was happy with the results of his fundraising efforts, he was also in conversation with his friend and business partner, David, to look for ways he could contribute that went beyond raising money. “After my first campaign, completing that, I called David and said ‘What else can I do?’” Zach recalls. “I wanted to do something more than just–I think it’s obviously helpful to give money to support a program, but I kind of wanted to create my own platform to support people who have mental health issues. That’s how 18percent was born.”

As he learned more about mental illness, Zach uncovered a surprising statistic: As of 2017, an estimated 46.6 million adults age 18 or older were living with a mental illness in the United States (according to the National Institute of Mental Health). That equals 18.9% of all U.S. adults, or nearly one in five people.

David, who runs a large online marketing community via the instant messaging system Slack, suggested the platform might be an ideal space for Zach to cause the transformation he was looking for. As the two stayed in conversation, the idea of creating an online community specifically designed to connect people who previously or currently struggled with mental health made more and more sense.

As Zach explains, “[Slack] is traditionally for work. It’s real-time chat, and there’s channels. At a typical workplace, there may be a design channel, a marketing channel, and you can communicate there…We applied similar methods, but for mental health.” And out of that seed–plus thousands of hours of dedicated work–the community of 18percent was born.

“We’ve created this community that has channels like ‘Depression,’ ‘Eating Disorder,’ etc., but there’s also a channel called ‘Funnies’ where people post memes. There’s a channel called ‘My Tiny Wins’ where people share their accomplishments. Some of these accomplishments may be ‘I didn’t cut today,’ or ‘I was able to get out of bed,’ and then some of them are ‘I got a job!’ So it really ranges. And to date, we have over 8,000 members, and we recently hit a million messages.”

When it comes to creating an online community that works, where people are supported in their sharing, it takes a lot of hands on deck. For 18percent, Zach is aware that this community wouldn’t be possible without the help of an amazing team. “We have 18 moderators,” he says, and the group connects every month for touch-base moderator calls that Zach structures similarly to those he has participated in with Landmark:

“I get on the call, and it’s like ‘What’s not working?’ And then I always ask people to share if there’s anything that a member has shared with them that’s special. Because there are thousands of messages, and it’s cool for all of us to be able to see some of these messages that other moderators get. So it’s a way to keep growing, keep refining this community, while also acknowledging when we do things that make an impact to people.

“It’s weird when you’re on the internet. The impact isn’t always felt when someone’s like, ‘Listen, because of this community, I didn’t kill myself.’ It’s crazy to think of. It almost doesn’t feel real because it’s through a computer; but it is real. And that’s what’s special and also sometimes just surreal to think about.”

This also serves as an important emphasis on the fact that moderators are not islands alone at sea; they are part of a larger group. That’s another function of the calls, Zach says, to remind everyone, “You can ask for support; you’re not invincible being a moderator!”

Zach and the 18percent moderators are all volunteers, and they know they can’t help with everything: “We’re not a replacement for therapy, we’re a supplement.” And because of that, creating partnerships with organizations like the Crisis Text Line have been crucially important to 18percent’s development.

As a result of this partnership, when people contact the Crisis Text Line with non-immediate problems, such as sending an ‘I’m lonely’ message, the Crisis Text Line will direct those individuals to the 18percent community. This frees the space for people with immediate needs to get connected with the Text Line sooner. “I think a lot of people, they all have their highs and they have their lows,” Zach says. “And [18percent’s] goal is, before you get too low, to help you.”

On the opposite side, if moderators or community members encounter comments that are immediate in nature, they know that the Crisis Text Line is a partner resource to which they can direct members in need. “We put a lot of mechanisms in place to keep growing and keep learning and have a good representation of people that are on the ground to see what’s happening.”

Using Landmark lessons to spread awareness through the media

“It’s easy to get wrapped up in ‘I’m not ready,’ or ‘Who am I to do this?’” Zach says. Having been in Landmark conversations for the last eleven years, he is aware of what a difference it’s made for him, and subsequently 18percent:

“I actually did The Forum when I was 18. My brother did it, and he told me, ‘If you do it, you won’t be shy anymore.’ And that’s why I did it. And after, the thought of myself being shy went away pretty quickly. Then with the Advanced Course, I ended up seeing Landmark as more about refining myself, trying to get to what I can do and push myself as far as I can go.”

And the answer to ‘how far,’ for Zach is beyond simply not being shy; he’s hosted Q&As with the son of the late comedian Robin Williams, had stories about 18percent run with People and Good Morning America–he’s even lead a TEDx Talk. “I would have never done a TEDx. Going up on stage without slides and speaking without a script? For 13 minutes in front of 2,000 people? Hell no. I used to be scared of public speaking. I would never do that. Go in front of my class? I hated that type of stuff!”

Now that Zach has a possibility to live into, he’s committed to it with a passion:

“I’m doing this because I want to help people. And worse case, it doesn’t work out and we shut it down. But let me give it a try, because no one else is doing it. I think that’s one thing I really learned–do you want to be in the stands or on the court? I just keep pushing, keep communicating. For all the projects I’ve ever done in my life, I just keep sharing and sharing. Sometimes it works and sometimes it doesn’t–I’ve had so many failures with projects! But I learn.”

Both Zach Schleien and the 18percent community are accessible online.

To anyone suffering from dangerous or suicidal thoughts, please reach out to the Suicide Prevention Lifeline, the Crisis Text Line, or call one of the numbers on the international list of suicide crisis lines.

Landmark graduates are up to some amazing things in the world. Want to read more inspirational stories? Check out the main Landmark Forum News page for articles about Landmark Graduates around the world.