Transforming the World – One Laugh at a Time 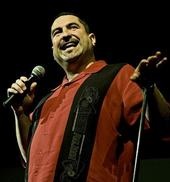 Ernie G is pioneer in standup comedy, being an inventor of what he calls empowerment comedy. Read his story and how he used what he saw in The Landmark Forum to set him on the road to making a difference through laughter. Compton, California, near Los Angeles, was known for its violence and low income households. Racial slurs were written on walls and gangs guarded their territories. On this day in June 1993, there were members of the rival gangs, the Crips and the Bloods, as well as LAPD officers and LAUSD school teachers present in The Landmark Forum. Most Landmark Forums have people who assist; this Forum had security guards. At the beginning, obscenities and slurs were shouted back and forth by all sides, and chaos was about to rein when the man leading The Landmark Forum, Jerome Downes, stood upon the stool he had been sitting on and stated, “This is why your community does not work!”

Both rival gangs sat down and the second Community Landmark Forum to ever be held in that city was underway. By the time the session was finished, both gangs shook hands. It was truly a miracle and one that changed Ernie G forever. This was his Landmark Forum.

Born Ernesto Tomas Gritzewsky, growing up just north of East LA and the son of a single mother, he thought of himself as a poor Mexican kid, but because of his Russian last name, he really didn’t fit into the Mexican community he grew up in. His absentee father had six kids, all from different mothers. Never one to be put down, and as a result of not fitting in, he became what he calls a chameleon; he could fit in anywhere. Ernie was the first in his family to graduate from Loyola Marymount University with a B.A. in Psychology and a minor in Chicano Studies, but he really didn’t know what he wanted to do with his degree.

It was a year later, in Sunnyvale, California that his Landmark Seminar Leader, Jane Zimmerman, told him that if he knew in his heart he wanted to be an entertainer, he was actually robbing the world of who he was by not being one. During the last session of his Landmark Breakdown Seminar, he was asked to do a few minutes of stand up comedy, and that is where his comedy career started.

After years of performing on the stand up circuit, he decided to create comedy that really made a difference, and that would create prosperity in the community. Within eight days of declaring that possibility, he was asked to appear in a TV commercial ad campaign for West Hills Community College, targeting getting Latino students and encouraging them to attend college. That year, became the national spokesperson for the Hispanic College Fund. He still speaks at high schools and colleges to empower college participation.

Ernie got the idea to put inspiration into his comedy, but initially, fellow comedians frowned upon that; yet, he knew that was where his heart was. He was asked to speak for ten minutes at a corporate event for the National Council de La Raza (a leading Latino civil rights group) to 1500 executives and delegates. He told his story, making it funny but inspiring, and his few minutes turned into fifty-six minutes. The audience did not want him to stop. He sold all 40 CDs he had brought with him and his career was well under way, empowering Hispanics to be much more than “as capable as the white people”. He supported them in being the best individuals they could be. He says his biggest contribution to people is transforming the perception they have of themselves and of how the world views them.

Ernie coined the phrase “empowerment comedy.” He tells clean jokes and lifts people’s spirits. He has been contracted to perform for such companies as Disney, McDonalds, General Mills, Pepsi, Coca Cola, Los Angeles Police Department, The Boys & Girls Clubs of America, Special Olympics, the U.S. Treasury Department,the  U.S. Census Bureau and others. It is an impressive career, one that was sparked by a comment from his Landmark Seminar Leader–he still takes Landmark seminars to continue having the breakthroughs in life that are so much a part of him.

When asked what he wanted people to remember him for, he simply said his motto is “If it is to be – It is up to me!” It is what he inspires in others and it is who he is. Please visit Ernie G at www.ErnieG.com.

1 thought on “Transforming the World – One Laugh at a Time”