Lights Out for the Holidays

Jennifer Sather made the news in Madison, Wisconsin for her “Lights Out Madison” project, encouraging residents to save power and cut back on electricity usage during the busy holiday season. Sather and her team of 17 people, which she organized as her project in the Landmark Education SELP program, were written about in The Capital Times on November 25.

At the risk of being called a party pooper, a new group in town is proposing that the winter holidays be celebrated a little differently this year – by turning out the lights.

It’s a radical proposal indeed, coming at the start of the Christmas lighting season.

But Jennifer Sather, a leader of the recently formed Madison Lights Out team, says the group doesn’t want to end holiday traditions, just develop some new ones.

The 17-member team, whose mission is to reduce electrical power use through community participation and “mindful living,” is asking Madison homeowners to turn off non-essential lights and unplug unused electronic equipment during December and July, two months of heavy electrical use.

“The point of the holidays is to be with your family and create good memories with people you love, not to outdo your neighbors by having the biggest light display,” said fellow team member Dan Agne, who works for Wisconsin Energy Conservation Corp., but joined Lights Out as a private citizen. “In some neighborhoods, this has become a competitive thing.”

Merely using timers for lights, so they are not shining at 2 a.m. when no one will see them, is a good step, as is installing energy-efficient LED (light emitting diode) lights, said Agne.

Moreover, he said, “People could be more into wreaths and tree boughs. Families could string popcorn to decorate trees. And candles in the house can provide a festive look without a thousand light bulbs.”

Sather, a software salesperson, is less eager than Agne to take on holiday lighting this December, hoping that awareness raised this year will translate to action next December.

Noting that traditions are very important to people, she hopes that Madison residents will develop community-oriented holiday traditions that don’t require a lot of manufacturing, shipping and electricity.

“I don’t put up Christmas lights anymore, but I used to,” she said. “It’s part of my own personal journey in regard to consumerism.”

The Madison Lights Out group makes no judgment of what is right and wrong, she said. That is up to individuals. “We are not trying to be the light cops,” Sather said.

But small actions by individual community members could create a big impact, she added, because the whole is greater than the sum of its parts.

“The idea is to reach out to the Starbucks crowd who haven’t bought their compact fluorescent lights yet,” Agne said. “They want to keep on with their usual routine. But saving energy can be simple behavioral things like turning the light out when you leave a room.”

Madison Lights Out intends to spread its message through yard signs, neighborhood associations and the media. Yard signs can be purchased for $4 each at the Willy Street Co-op, Ground Zero Coffee, the Capitol Street Market and Cargo Coffee. 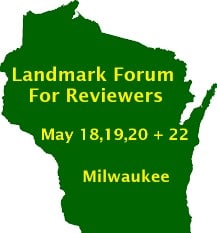 The Landmark Forum for Reviewers is being held for the first time in Milwaukee, Wisconsin on May 18-20 & 22.

The efforts of two Landmark Forum graduates to ban plastic bags and styrofoam caught the attention of the Sunshine News Network.

The Green Wheels project is boldly causing bicycle commuting in the heart of India.

Increasing the penalty for tiger poaching in India, and educating school children about the importance of tigers to the ecosystem are both part of the ‘Save Tiger Save Life Signature Campaign’.

Festivals, competitions and workshops to promote upcycling are spreading across India.