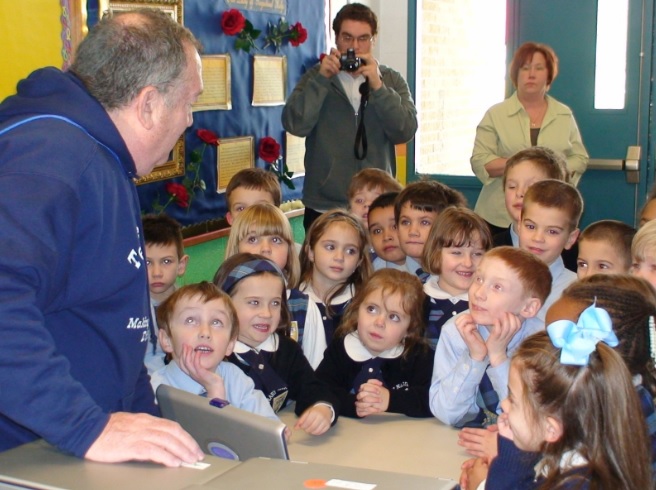 A Landmark graduate begins a bold project to bridge the digitil divide by getting computers into the hands of low income kids. Two hundred and eight years ago, the first man of European heritage crossed the Continental Divide, essentially opening the western United States to hundreds of thousands of pioneers and a transformed future. In 1957, the flight of Russia’s Sputnik blasted into space, effectively launching an era of science, math and the great beyond. More recently, computers and the internet have eroded national borders and revealed cultures, creating a vast network of information and wisdom.

Unfortunately, this seemingly ubiquitous leap in technology has passed over a crucial portion of society. Poverty and the children of the poor stand on one side of this modern Digital Divide and life’s potential flows unimpeded on the other. Landmark graduate Robert Toporek and his TeamChildren organization are working to level the digital divide by providing computers and proven educational software to underprivileged families throughout the United States.

“In the beginning is the best time to do everything,” Toporek assures us. The years between birth and six are critical because it is in that 72 month span that children can pick up information and skills at a rate faster than at any other time in their lives. Thus, what children do and do not have access to when they are young makes a difference. These omissions may include a lack of books or other reading matter, a dearth of complex toys or participation in stimulating games, and even too little engaging conversation with adults. Toporek’s statement about early intervention is based on brain science and authoritative research. Animals, for example, confined to cages without exercise, stimulation, or objects to manipulate, exhibit a measurable decrease in the generation of synapses and neurons in the brain. Children in poverty can experience a similar diminishment in cognitive function and constraints in terms of capability.

As a consequence of seeing this reality first hand, Toporek decided that it was crucial to provide computers and innovative learning software to low income youngsters and their families because, “Poverty shrinks the brain, literally. Poverty impacts the brain similarly to a stroke – with an overdose of damaging cortisol and adrenaline – which leads to children always being in a fight or flight mode. It has a debilitating effect. It literally shows up in the brain and how the body functions.”

In short, not only does poverty rob children of the capacity for maximum brain development, it also taxes existing brain power as they struggle to find the necessary resources for life and deal with its daily struggles. This negative biochemistry may not become evident in every low income child, but the chance of it occurring, says Toporek, demands a concerted, focused, and caring response.

Which is where TeamChildren comes in; it is an organization dedicated to improving early childhood education without relying on public schools or government funding. Their work, to date, the delivery of 11,000 computers to needy families, has resulted in incredible outcomes for thousands. When considering a person who might be the poster child for TeamChildren, Toporek talks instead about a father, an immigrant from South Vietnam. The man had been in the South Vietnamese army back in the 70’s and was eventually captured by the North Vietnamese army and imprisoned. Over time he escaped and by a circuitous route ended up in Morristown, PA. “He doesn’t speak English, but out of a desire to help his children, he somehow found the program. He brought the kids in to volunteer. They got a computer. Each one went on to high school, then college, and now have great jobs. Three of the children from that family still volunteer with us.”

In another case, a woman wanted a computer for her aunt, a matriarch who was one of 11 eleven children, 8 of whom grew up illiterate. The lady came to TeamChildren because she didn’t want another generation of nieces and nephew to grow up without being able to read. With the computers installed and the children eager to learn, that same caring family member goes over to help with homework every day. The benefits of loving attention and the school-ready computer are reflected in their grades.

Such positive data is supported by evidence throughout the world. For example, a TED prize winner demonstrated that 6 – 13 year olds can teach themselves many things when given access to a computer; this is irrespective of any of the usual measurable constraints such as income, parental involvement, schooling, or access to resources.

TeamChildren offers, not only low cost computers, but also highly effective educational software and links to such sites as the Khan Academy. If the local schools do not have tutors, the software and sites can serve the same function, enabling struggling students to create a bridge between their limitations and educational advancement. Nor is it an impediment if the schools have computers but no one to keep them running. At TeamChildren, a willing crew of volunteers, many of whom have been recipients of TC computers themselves, stand ready with support and repair. With this secondary team as a backup, in homes where the parents are overworked or uninvolved, children can still discover their own road to a better future through their access to the digital universe.

And, although that alone would be a boon applauded by many, Toporek, with his years of involvement with Landmark, acknowledges another, imperative component of a balanced and productive childhood. He speaks passionately about a family transformed, or more specifically, the realization of the possibility of transformation for everyone.

“The average person, and certainly the population we work with, has not been saving up their money so they can do The Landmark Forum this weekend. Yet, to escape from poverty, they need the special education offered by Landmark. What is it going to take?,” he asks. To that end, he has given parents scholarships to The Landmark Forum and watched as they came out of the seminar and, then,  completely changed their way of life, their parenting, and their plans for the future.

It is such a powerful message when parents take action to improve their family’s situation.  Children who watch their parents strive and achieve are far more likely to set and master challenges than those who don’t.

In the end, TeamChildren is a multi-pronged endeavor, seeking to put children on a positive path educationally even as it assists parents and others to achieve in ways they never thought possible.

TeamChildren accepts and refurbishes used computers from Pentium IVs on up, plus keyboards, mice, and monitors, not to mention financial donations.  Call: 610-666-1795 for details and hours of operation, and visit their website at: http://www.teamchildren.com/.

5 thoughts on “Climbing and Conquering the Digital Divide: TeamChildren”