After 5 years and 750 donated bicycles, Leader Steps Down

The Laconia Area Bicycle Exchange moves into a new era. 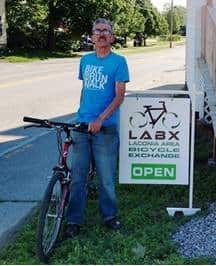 The Laconia Area Bicycle Exchange was launched in April 2014 by John Rogers as his project in Landmark’s Self-Expression and Leadership Program. Now, after Rogers and his team of volunteers have provided 750 bikes to those in need, Rogers is moving on and opening up the non-profit for new leadership.

As he leaves, the exchange currently has 20 bikes ready to give out, with about 75-90 total in its inventory.

Anyone interested in becoming the new executive director can contact Rogers at 603-630-7571 or [email protected] For more information, visit labx.bike or the Laconia Area Bicycle Exchange on Facebook.

This piece is based on an article which appeared in The Laconia Daily Sun.

1 thought on “After 5 years and 750 donated bicycles, Leader Steps Down”