BagUps Making a Difference, One Bag at a Time 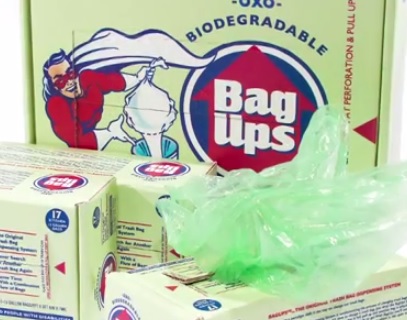 One Landmark Forum graduate has created Bag Ups in attempt to revolutionize the way people use plastic kitchen bags.

BagUps is a unique biodegradable, automatically replaceable kitchen bag system. Created by a Landmark Forum graduate, BagUps is now expanding dramatically as part of a crowd funding campaign. With BagUps, when each kitchen bag is pulled up when full, the next bag comes up automatically, meaning that the used bag is replaced in an instant. Unlike almost all commercial plastic bags, BagUps are made in the USA, and put together entirely by veterans and the disabled. Additionally, the system uses oxo-biodegradable trash bags that break down in two years, instead of the thousands of years it takes for a regular bag.

“It was through taking seminars with Landmark that I finally stopped procrastinating and did something about it,” says founder Jack Licata.

Already featured on over a dozen television segments, including MSNBC, CBS, Fox5 and many more, BagUps are being noticed by the nation’s largest retailers. Its founders are  pursuing a crowd funding campaign to get the support they need to be a major player in the retail world. Check out their Indiegogo campaign (see here). Learn more below.

3 thoughts on “BagUps Making a Difference, One Bag at a Time”